Kim Jong Un says ‘open to dialogue’ with South Korea, will only use nuclear weapons if threatened 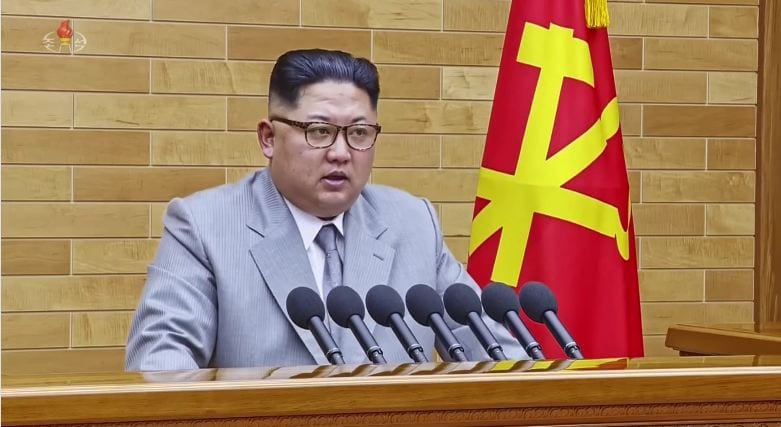 Kim Jong Un on Monday warned the United States that he has a “nuclear button” on his desk ready for use if North Korea is threatened, but offered an olive branch to South Korea, saying he was “open to dialogue” with Seoul.

After a year dominated by fiery rhetoric and escalating tensions over North Korea’s nuclear weapons program, Kim used his televised New Year’s Day speech to declare North Korea “a peace-loving and responsible nuclear power” and call for lower military tensions on the Korean peninsula and improved ties with the South.

“When it comes to North-South relations, we should lower the military tensions on the Korean Peninsula to create a peaceful environment,” Kim said. “Both the North and the South should make efforts.”

Kim said he will consider sending a delegation to the Winter Olympics Games to be held in Pyeongchang, South Korea, in February.

“North Korea’s participation in the Winter Games will be a good opportunity to showcase the national pride and we wish the Games will be a success. Officials from the two Koreas may urgently meet to discuss the possibility,” Kim said.

South Korea said it welcomed Kim’s offer to send a delegation to the Pyeongchang Games and hold talks with the South to discuss possible participation.

“We have always stated our willingness to talk with North Korea any time and anywhere if that would help restore inter-Korean relations and lead to peace on the Korean peninsula,” a spokesman for the presidential Blue House said.

“We hope the two Koreas will sit down and find a solution to lower tensions and establish peace on the Korean peninsula.”

“The (organizing committee) will discuss relevant matters with the South Korean government as well as the International Olympic Committee,” he said in a statement.

South Korean President Moon Jae-in has said North Korea’s participation will ensure safety of the Pyeongchang Olympics and proposed last month that Seoul and Washington postpone large military drills that the North denounces as a rehearsal for war until after the Games.

Moon took office in May last year pledging to engage Pyongyang in dialogue and restore strained ties after nearly a decade of conservative rule in the South.

But North Korea has so far snubbed his overtures for warmer ties, including an offer to hold inter-Korean military talks about ceasing hostile activities along the border, as it tested missiles at an unpredecented pace and lambasted joint military drills between Seoul and Washington.

Rather than encouraging U.S. measures that ”threaten the security and peace of the Korean peninsula,“ Seoul should instead respond to overtures from the North, and ”stop nuclear war exercises with foreign forces, Kim said.

The U.S. State Department did not immediately respond to a request for comment on Kim’s New Year’s address.

“Reality, not a threat”

North Korea tested intercontinental ballistic missiles and conducted its sixth and most powerful nuclear test in September in defiance of international warnings and sanctions, raising fears of a new conflict on the Korean peninsula.

After testing what Pyongyang said was its most powerful intercontinental ballistic missile (ICBM), capable of delivering a warhead to anywhere in the continental United States, at the end of November, Kim declared his nuclear force complete.

He continued that theme in his New Year’s address, announcing that North Korea would focus on “mass producing nuclear warheads and ballistic missiles for operational deployment” in the coming year.

This, Kim said, was “irreversible with any force”, making it impossible for the United States to start a war against North Korea.

“The whole territory of the U.S. is within the range of our nuclear strike and a nuclear button is always on the desk of my office and this is just a reality, not a threat,” he said, while emphasizing that the weapons would only be used if North Korea is threatened.

Kim’s customary New Year’s speech is closely watched for indications of the policy direction the unpredictable and reclusive leader is likely to pursue in the coming year.

Beyond listing military accomplishments, Kim also outlined economic gains as part of his two-pronged policy of developing his country’s economy and military.

Despite increased international sanctions imposed over the weapons program, North Korea made progress in areas like fabrics, shoes and tractors, Kim said.

While Kim is keen to declare his weapons program a success, he is unlikely to completely end his contentious testing regime, said Scott LaFoy, a ballistic missile analyst at the website NK Pro, which monitors North Korea.

“I‘m still very skeptical of the ‘complete’ thing they’ve been talking about, if only because we’ve seen so much activity in regards to the submarine launched ballistic missile program,” he said. “I think a slowdown (in testing) is very realistic, though.”

Kim seems likely to tone down his weapons testing at least ahead of the Olympics, said Nam Sung-wook, a North Korea expert at Korea University in Seoul.

“What North Korea is most afraid of is being forgotten in the international arena,” he said. “Without launching missiles and conducting a nuclear test, North Korea will be in the spotlight just by attending the Winter Olympics.”