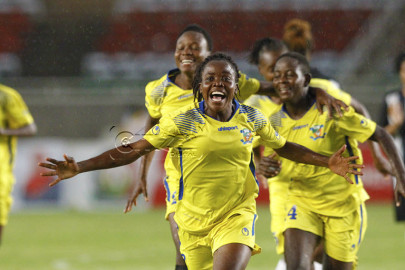 Vihiga Queens celebrate a goal in a past match.

After registering a crushing 6-0 victory over Kayole Starlets at the weekend in a Kenya Women Premier League match, Vihiga Queens head coach Boniface Nyamunyamuh says her girls have trained their eyes on bagging the league title

Queens were in rampant form and showed no mercy to the hapless starlets with France bound Terry Engesha bagging a hat-trick while danger girl Jentrix Shikangwa also helped herself to a brace as Maureen Ater rounded off the rampant display by also shaking the net.

And in her reflections Nyamunyamuh hailed her charges for the determination urging the girls to keep their eyes on the prize – the league title.

“It was a very entertaining match considering that we were playing away. All my departments impressed and what I want from my girls is to be consistent in winning.

He went on, “I also congratulate my keeper Diana Tembesi who ensured she didn’t concede a goal. Being introduced for the second time, she proved that she can fit in Liian Awuor shoes,” she said of the goalie who last week sealed a move to the French top tier side ASJ Soyaux-Charente, penning a two-and-a-half seasons deal.

This came in the backdrop of playing a starring role in the inaugural CAF Women Champions League tournament held in November 2021 in Cairo, Egypt.

“Our aim is to win the title something I am sure we’ll achieve if we continue with the same spirit. All we need for now is continue wining matches and avoid conceding many goals. Our next match is against Gaspo, we understand that they are second in the log but I am sure it shall be a good match which we are looking forward for a winning,” added Nyamunyamuh.