Iran believed to be behind attack on U.S troops in Syria 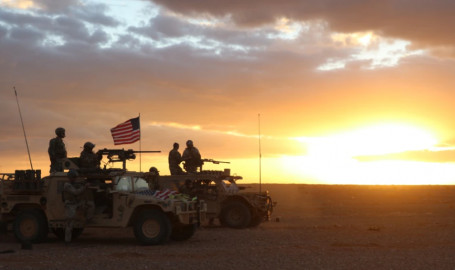 Iran is believed to have been behind a drone attack last week at the al-Tanf military outpost in southern Syria where American troops are based, two U.S. officials told VOA.

The officials, speaking on condition of anonymity, said Iranian drones were used in the attack, but they were not launched from Iran. The drones were carrying explosives that caused damage to buildings but no injuries or deaths.

Five drones carried out the attack, according to one of the officials.

U.S. and international troops at al-Tanf have been training Syrians to counter Islamic State militants.

The base sits on a major road that links Baghdad, Iraq, to Damascus, Syria, close to where the borders of Jordan, Iraq and Syria converge. U.S. officials say Iran could use the route to establish a continuous “land bridge” from Tehran to the Mediterranean.

Pentagon press secretary John Kirby declined to “get into attribution” when asked by VOA who was responsible for the attack.

“We have seen these kinds of attacks in the past from Shia militia groups, which we know are backed and supported by Iran, but I'm not going to talk specifics," he told reporters at the Pentagon press briefing Monday.

“It was complex. It was deliberate,” he added.

Meanwhile the Biden administration says international patience with Iran’s reluctance to reenter nuclear talks is “wearing thin.” Robert Malley, U.S. special envoy for Iran, said the United States and its partners are considering alternatives to a diplomatic path but that any decision about future options will depend on Iran’s actions.

The last major Iranian attack on U.S. forces was in January 2020, when Tehran launched several missiles at al-Asad air base in Iraq. No U.S. service members were killed, but more than 100 received traumatic brain injuries as a result of the blasts.

The January 2020 attack was in response to the U.S. drone strike earlier that month near the Baghdad airport that killed Qassem Soleimani, the Iran Quds Force commander who oversaw activities of various militias in Iraq. The strike also killed Abu Mahdi al-Muhandis, the Iraqi founder of the Iranian-backed militia group, Kataib Hezbollah.