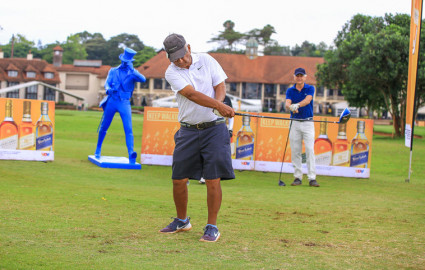 The team of John Kashangaki, Charles Kiprono, Sanjay Archya and Mayak Amin carded a combined score of 107 points to be crowned the overall winner of the third leg of the Johnnie Walker Golf Series held on at the weekend at Windsor Golf  Club.

In the ladies category, Maria Torraddo, posted 36 points to claim the top honours ahead of Maria Aloo who scored 32 points to emerge second.

Claiming top positions in the Nines were Kamau Nyabwengi who scored 24 points in the first nine, while Avnish Bhandari scored 20 points in the second nine to emerge the star.

In the Longest Drive contest, Riz Charania and Chrissie Adams emerged respective winners in the Men’s and Ladies categories.

In the Longest Drive contest, Riz Charania and Chrissie Adams emerged respective winners in the Men’s and Ladies categories.

The event attracted a field of 150 players who braved the chilly weather conditions to battle it out for the qualifying positions. The top three teams now join the list of teams to play in the next round of the Series – Eagles Round, as they aim to make the cut to play in the Series’ Grand Finale where a fully paid-up trip to the iconic Gleneagles Golf Course in Scotland will be up for grabs.

Speaking during the event, John Kashangaki expressed his excitement having scooped the Men’s Category prize as well as the overall winner’s honours.

“I am delighted to have emerged the winner in the Men’s category as well as emerging the overall winner together with my teammates. It was a good day and I hope that the next round will be even better. The series has given us players a great opportunity to better our skills and competitiveness and we are grateful to Johnnie Walker for this opportunity,” said Kashangaki.