Mexico to Impose Visa Requirement on Venezuelans to Stem Migration 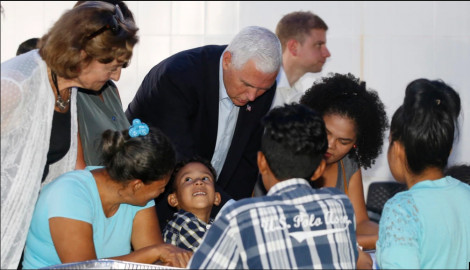 U.S. Vice President Mike Pence leans in as he visits with Venezuelan families at the Calvary Chapel in Cartagena, Colombia, Aug. 14, 2017.

Mexico will impose visa requirements on Venezuelan visitors, as the country attempts to stem a steep rise in the number of people from the South American nation trying to enter the United States illegally, the Interior Ministry said on Friday.

The ministry said in a document published online that it had detected a "substantial increase" in Venezuelans entering Mexico to reach a third in the country, as well as giving false declarations on their motives for arrival.

Venezuelans, many of whom have been departing their homeland due to sustained economic turmoil, do not currently need a visa to enter Mexico as tourists.

Reuters last month reported that Mexico was considering steps to impose tougher entry requirements on Venezuelans, partly in response to requests from the United States, which is dealing with record numbers of migrants at its southern border.

"The growing trend in the migratory flow of (Venezuelan) nationals, in irregular transit to a third country stands out, marking an increase of more than 1,000% compared to the same period in the previous five years," the ministry said.

The ultimate destination of the overwhelming majority of migrants passing through Mexico is the United States.

The U.S. government has urged Mexico to help it reduce the flow of illegal immigration across the U.S.-Mexico border, which has created a major challenge for President Joe Biden.

The visa requirement on Venezuelans follows a similar move by Mexico on Brazilian nationals.

In September, Mexico suspended visa exemptions for Ecuadorians for six months following a jump in that country's nationals heading to the U.S. border.

The ministry said the visa requirement would take effect 15 days after the notification was published in the government's official gazette, a step that is still pending.