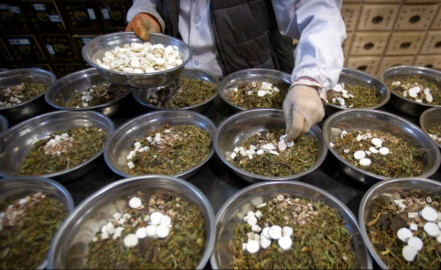 Hing Pal Singh is among dozens of patients with daily appointments at the Oriental Chinese Herbal Clinic in Nairobi.

Singh, 85, has been suffering from spinal problems for five years and is now trying herbal remedies.

Traditional Chinese medicine is becoming more popular in Africa, according to a 2020 study by Development Reimagined, a Beijing international consulting firm.

A February 2020 op-ed written by a Beijing think tank researcher and published in the state-run China Daily said such traditional medicine would “boost the Chinese economy, contribute to global health and prove to be a shot in the arm for China's soft power.”

Conventional medical doctors such as Sultan Mantendechere, though, say patients are overlooking the potential harm that some herbal remedies can cause, especially if used too frequently or at too high a dosage.

“They do work in quite a number of circumstances," Mantendechere said. "Having said that, our main worry as practitioners, the medical practitioners, is that the use of herbal medicine is not as regulated as we would want it to

Although the safety and effectiveness of traditional Chinese medicine is still debated worldwide, herbal practitioners such as Li Chuan continue to gain popularity among those seeking alternative medication.

Li said some of his patients were benefiting from purported COVID-19 remedies, although there is scant scientific evidence that they can help against the disease.

“Many people buy our herbal tea to counter COVID-19," Li said. "The results are good.”

Environmentalists fear the growth of traditional Chinese medicine will encourage poachers to go after endangered wildlife such as rhinos and some types of snakes used in making the potions.

Daniel Wanjuki, an environmentalist and the lead expert at Kenya’s National Environment Management Authority, said that "with people saying that the rhino horn may actually be used as an aphrodisiac, this has led to almost the complete eradication of the rhino species in Kenya and in Africa in general.”

Kenya spends an estimated $2.7 billion each year on health care, according to national statistics.

“Africans spend quite a lot of money traveling to countries such as India and the UAE to get treatment" and would benefit if herbal medicine "can provide more natural, cost-effective health care,” he said.

In 2021, Kenya’s national drug regulator, the Pharmacy and Poisons Board, approved the sale of Chinese herbal health products in the country. Practitioners such as Li hope that more nations will give approval to Chinese herbal medicine in the future.