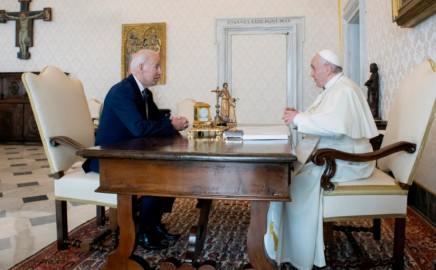 U.S. President Joe Biden talks with Pope Francis as they meet at the Vatican, Oct. 29, 2021. (Vatican Media via AP)

U.S. President Joe Biden met Friday at the Vatican with Pope Francis, head of the Roman Catholic Church, of which Biden himself is a loyal member.

In a White House statement, Biden lauded the pope for "his advocacy for the world's poor and those suffering from hunger, conflict, and persecution." Biden also commended his "leadership in fighting the climate crisis, as well as his advocacy to ensure the pandemic ends for everyone through vaccine sharing and an equitable global economic recovery."

The meeting marked the beginning of Biden's five-day visit to Europe. The trip will have Biden engaged in a whirlwind of American diplomacy, featuring a meeting of the world's wealthiest nations and a major climate summit with high stakes and far-reaching implications.

Biden first attends the October 30-31 G-20 summit in Rome, where leaders of the world's wealthiest nations will discuss the pandemic, climate change and issues that move the global economy. He'll continue to the COP26, the two-day United Nations conference on climate in Glasgow, Scotland, which starts November 1.

With Chinese President Xi Jinping and Russian President Vladimir Putin not attending either of the two summits in person, Biden will take the lead at the forums, Sullivan told reporters this week.

"The U.S. and Europe will be there, and they'll be there energized and united at both the G-20 and COP26, driving the agenda," Sullivan said.

It won't be easy for Biden, who needs to repair U.S. credibility following the messy military withdrawal from Afghanistan and a rift with transatlantic ally Paris over the AUKUS (Australia, United Kingdom and United States) nuclear submarine deal that scuttled a multibillion-dollar French submarine contract with Australia.

These are some of the issues that Biden and other leaders will focus on during their meetings:

Implementing more aggressive climate actions will be a primary focus in Rome. The G-20 — comprising the 19 largest economies plus the European Union — accounts for two-thirds of the global population, 80% of global GDP and around 75% of greenhouse gas emissions.

Countries are expected to announce more emissions reduction pledges to meet commitments made at the 2015 Paris Climate Accord, which sought to limit global warming to 2 degrees Celsius — ideally to 1.5 degrees Celsius. To meet this target, global emissions need to be cut in half by 2030 and reach net-zero by around mid-century.

Biden is expected to emphasize the U.S. pledge to cut emissions 50% to 52% by 2030 compared with 2005 levels. But it is uncertain whether he can deliver his climate agenda while his infrastructure and social spending bills struggle in the U.S. Congress.

Coal is a key point of contention in both the G-20 and COP26 meetings. The U.N. has called for wealthy countries to phase out coal by 2030, but G-20 environment ministers have failed to agree on a timeline.

Indonesia, a large greenhouse gas emitter that will take over the G-20 presidency in December, is expected to press developed nations to fulfill their pledges to provide $100 billion a year in climate financing to support developing countries, reduce emissions and mitigate the impact of climate change. Further delaying these commitments could break down trust in meetings.

"The investment hasn't come through yet. You can't expect to address these issues without investment," said Aaron Connelly, a research fellow in Southeast Asian political change and foreign policy at the International Institute for Strategic Studies.

G-20 finance and health ministers are crafting a new mechanism to combat future pandemics. In a letter to their G-20 colleagues, U.S. Treasury Secretary Janet Yellen and Sri Mulyani Indrawati, finance minister of Indonesia, who will assume the G-20 presidency in December, said the mechanism would facilitate global coordination for the next pandemic and establish a new financing facility to keep up with emerging threats.

Sullivan said in an interview Friday with VOA aboard Air Force One that developing a new mechanism is only one aspect of a comprehensive strategy to combat future pandemics.

The G-20 faces pressure to address COVID-19 vaccine inequality. There is still a shortfall of 500 million vaccine doses to reach the World Health Organization's 40% vaccination target in all countries by the end of 2021, while 240 million doses are lying unused in the West, said Gordon Brown, WHO ambassador for global health financing.

"The sheer selfishness and greed behind these deaths is unfathomable," said Agnès Callamard, secretary general of Amnesty International. "While G-20 countries enjoy vaccination rates of around 63%, only 10% of the population in low- and lower-middle- income countries have been able to get vaccinated."

The pandemic has wrought havoc on the global supply chain. Reduced industrial activity has caused shortages of materials, port congestion, increased freight pricing and difficulty in forecasting demand due to changing consumer attitudes. Earlier this month, citing those economic stressors, the International Monetary Fund trimmed its 2021 global growth forecast to 5.9% from its 6.0% forecast in July.

Meanwhile oil prices are at their highest level since 2014 due to a global supply shortage and strong demand, particularly in the U.S., the world's biggest consumer of gas.

Biden will be "laser-focused on supply chains and energy prices because he knows that these issues impact working families here in America," Sullivan said earlier this week.

Sullivan told VOA Friday that Biden "will make announcements about what the United States itself will do, particularly in respect to stockpiles, to improving the United States' capacity to have modern and effective and capable and flexible stockpiles."

Sullivan also predicted that "we are expecting some solid outcomes from the supply chain meeting, some of them from us directly and some agreed with others."

However, it may be difficult to get tangible deliverables at the summit.

"They will make the right sort of hortatory statements about this, but I'm not sure there's going to be any new or significant action," said Matthew Goodman, senior vice president for economics at the Center for Strategic and International Studies.

The G-20 is expected to again voice support for alleviating debt issues in lower income countries through various existing international mechanisms, but also unlikely to come up with major breakthroughs.

"Debt restructuring is really important in all of this, in the context of the ongoing COVID pandemic," said Leslie Vinjamuri, director of the U.S. and the Americas program at Chatham House.

The G-20 has developed the Common Framework to provide a path for debt reduction on unsustainable lending to lower-income countries. It has yet to be applied, partly due to reluctance from Beijing, which is often the source of those loans.

G-20 members are expected to reaffirm the deal agreed by 136 countries announced earlier this month by the Organization for Economic Cooperation and Development, to ensure big companies pay a minimum tax rate of 15% and make it harder for them to avoid taxation. The question is whether and how soon G-20 members can implement the agreement within their own domestic legal framework.