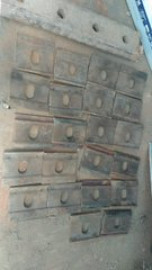 The action by the pair, Nichodemus Chave and Michael Mbevi, led to a two hour delay on the railroad on November 22, 2021 as engineers fixed the damage.

“Police officers recovered all the twenty two (22) pieces of Gauge Blocks and one (1) Fish Plate vandalised from the SGR line. The items were part of a haul that was being loaded into a waiting lorry at a scrap metal yard at Machinery trading centre, Kinyambu location, Mtito Andei,” the Directorate of Criminal Investigations said in a statement.

Mbevi is stated by police to be a scrap metal dealer while Kyove is the driver of the lorry in which the blocks were being loaded.

According to the DCI, the two will be charged with Economic sabotage and terrorism related offences.

“The standard gauge railway is a key national infrastructure that supports the socio-economic development of our country. While the service is mandated to provide an enabling environment for businesses to thrive, we strongly warn business people against similar unscrupulous dealings,” the DCI said.