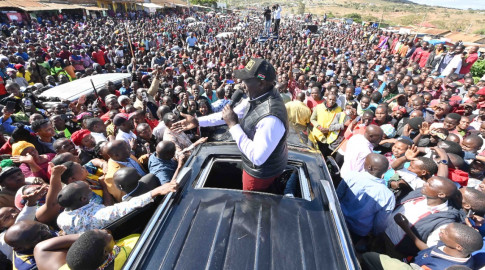 Deputy President William Ruto has promised to revamp the livestock sector for pastoralists in Kajiado in a bid to improve their livelihoods.

DP Ruto was addressing a rally at Ilbisil in Kajiado County on Friday where he vowed his government would invest heavily in promoting breeds of livestock, combating droughts and buying their produce (milk and meat).

The deputy president highlighted the key problems affecting the residents in the region such as drought, floods and poverty saying that if elected president, he would prioritize changing the narrative of recurrent problems in the country.

The DP told off his competitors claiming that they do not have a track record for what they have done in the country and the region at large.

He rode on the government projects as his track record in infrastructure developments, roads, education and health care.

Ruto further criticized former Prime Minister Raila Odinga attributing the failures of the Jubilee government to the handshake between him and President Uhuru Kenyatta.

He lauded his United Democratic Alliance (UDA) party for strides it has made claiming “it is the most popular party in Kenya with over 160 MPs”, calling upon more members to subscribe to the bottom-up approach which seeks to foster economic growth.