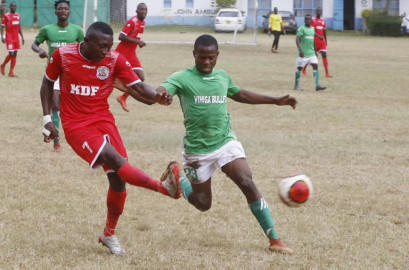 That took Ulinzi into the break holding a comfortable 2-0 advantage and momentum remained in the soldiers' corner after the restart with substitutes Shambi Ibrahim and Masita Masuta combining well only for the former to be denied by the crossbar with a headed attempt.

Vihiga Bullets suffered their eighth loss of the season as they went down 2-0 at the hands of Ulinzi Stars on a rainy Saturday afternoon at the ASK Showground.

The newly promoted side have simply been unable to cope with life in the FKF Premier League and appear destined for the drop as their free-fall continued in Nakuru.

The visitors were punished for goalkeeper Bernard Otieno's error which Oscar Wamalwa capitalized to open the scoring just six minutes into the match.

Bernard Ongoma doubled Ulinzi's advantage with a headed effort five minutes to the break to cap a dominant opening half for coach Stephen Ocholla's men.

Victory lifted Ulinzi into eighth on the league standings, just six points off the top spot while Bullets remained rooted at the bottom with just two points from their opening ten fixtures.

Ulinzi wasted no time imposing themselves in the match and were rewarded for their brave start as Wamalwa arrived to nod home a casual spill from Otieno.

That was all down to some lovely work from Clinton Omondi who bamboozled Nickson Khalwale and whipped in a delivery which Otieno was unable to handle and Wamalwa was on hand to apply the important touch.

Bullets finally got their footing in the match with Godfrey Airo testing Stephen Ochieng with a snap shot but the Ulinzi goalkeeper was alert to collect it.

Omondi was causing loads of trouble down the right wing and almost took Ulinzi 2-0 up after beating Khalwale again although his final effort lacked enough sting to beat Otieno.

John Kago razed an effort over the crossbar after some tidy combination play between Omondi and Kevin Ouma. The pressure paid off three minutes later as Ongoma rose highest to power home the second from Daniel Waweru's corner.

That took Ulinzi into the break holding a comfortable 2-0 advantage and momentum remained in the soldiers' corner after the restart with substitutes Shambi Ibrahim and Masita Masuta combining well only for the former to be denied by the crossbar with a headed attempt.

Ulinzi made a double change, hauling off John Kago and goalscorer Wamalwa for Mark Bikokwa and and Tindo Biko as they sought to introduce fresh legs to see out the tie. Vihiga responded by taking off Vincent Odongo for Ian Kigada.

The hosts almost got the third through Kevin Ouma but he could not direct his header on target.