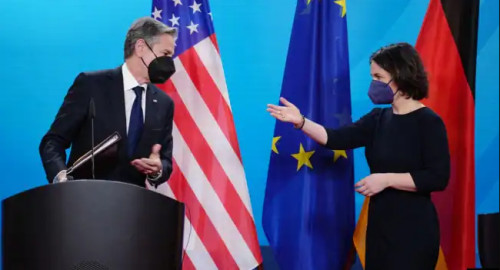 U.S. Secretary of State Antony Blinken vowed Thursday that the United States and its allies would inflict “swift and massive” costs on Russia if it invades Ukraine but said Russian President Vladimir Putin can still opt for a diplomatic solution to rising tensions in eastern Europe.

“We’re at a decisive juncture,” Blinken said in Berlin of the standoff between Western countries and Moscow over Putin’s massing of 100,000 troops along Ukraine’s eastern flank.

Blinken said the U.S. has been "very clear throughout" that if any Russian military forces move across the Ukrainian border “they will be met with a swift, severe united response from the U.S, and our allies and partners."

After meeting with German Foreign Minister Annalena Baerbock, Blinken said Putin has a choice between “dialogue and diplomacy on the one hand and conflict and consequences on the other hand. He has to decide which course to take.”

Blinken is meeting Friday with Russian Foreign Minister Sergey Lavrov, in Geneva, the fourth time in the last week that U.S. and Russian officials have engaged in direct talks.

The West is demanding that Russia pull its troops and weapons away from the Ukraine border while Moscow is pushing for NATO, the Western military alliance, to curtail its operations in eastern and central Europe and insisting that NATO reject Ukraine’s bid for membership.

While the U.S. has been resolute in saying that a Russian military invasion of Ukraine would draw swift and significant economic sanctions, but no U.S. or NATO military response, it has been less clear what the West might do in the event of Russian cyberattacks or other actions against the Kyiv government.

At his news conference Wednesday, U.S. President Joe Biden made confusing remarks about the West’s response to what he called a “minor incursion.”

White House press secretary Jen Psaki later said Biden “knows from long experience that the Russians have an extensive playbook of aggression short of military action, including cyberattacks and paramilitary tactics. And he affirmed today that those acts of Russian aggression will be met with a decisive, reciprocal, and united response.”

Biden’s comment about a “minor incursion” drew a sharp retort from Ukrainian President Volodymyr Zelenskiy, who said on Twitter, “We want to remind the great powers that there are no minor incursions and small nations. Just as there are no minor casualties and little grief from the loss of loved ones. I say this as the president of a great power.”

Biden hedged on whether Putin will invade Ukraine, saying, “I’m not so sure he [is] certain what he’s going to do. My guess is he will move in. He has to do something.”

The U.S. leader said he does not believe Putin wants a “full-blown war” but does want to test the resolve of the United States and NATO.

Russia has denied it has intentions of invading Ukraine, while it seeks security guarantees, such as Ukraine not joining the NATO, the seven-decade-old military alliance formed after World War II.

On Thursday, Russian Foreign Ministry spokeswoman Maria Zakharova alleged that Ukrainian and Western claims of an imminent Russian attack on Ukraine were a "cover for staging large-scale provocations of their own, including those of military character."

"They may have extremely tragic consequences for the regional and global security," Zakharova said.

She pointed to Britain delivering weapons to Ukraine in recent days, claiming that Ukraine perceives Western military assistance as a "carte blanche for a military operation” in the Donbas region of eastern Ukraine.