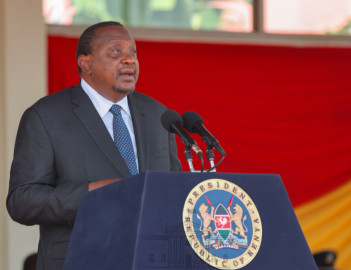 President Uhuru Kenyatta has warned that persons found culpable of vandalizing critical development infrastructure will be charged with treason.

His sentiments come after a Kiambu Court on Tuesday ordered the detention of nine senior Kenya Power employees, for a further eight days, to allow for investigations over their alleged involvement in the countrywide power outages experienced in different parts of the country last week.

It is alleged that the nine suspects’ indecisiveness to act on a tip-off highlighting the destruction and vandalism of power lines subsequently led to the nationwide blackout.

According to President Kenyatta, such acts of vandalism translate to economic sabotage since the said infrastructures can bring the country’s activities to a standstill if they don’t operate optimally.

Kenyatta was speaking at the National Police Service College in Kiganjo on Thursday where he oversaw the passing out parade of a fresh cohort of 300 cadets.

However, according to section 40 of the penal code, a person is guilty of treason if he or she imagines, invents, devises or intends death, maiming or wounding, or the imprisonment or restraint of the President or overthrows the government through unlawful means.

One could also be found to have committed treason if they express, utter or declare any of the above-aforementioned offences by publishing any printing or writing or by any overt act or deed.

The Head of State similarly revealed that the State will temporarily ban the export, buying and selling of scrap materials to contain acts of vandalism on critical infrastructure. According to police reports, parts of the destroyed power transmission lines were sold as scrap metal by the perpetrators.

“As of today we will no longer allow and we have a moratorium on the export or buying and selling of any scrap material until we have put in place proper guidelines that will ensure that the material is not coming from the hard material investments the people of Kenya have made,” he added.

“I urge you to rise over the expectation of many. Anything you do whether in uniform or not, remember you have solemnly sworn to the government to serve in dignity. I urge each of you graduants to serve this country with fidelity,” said the Head of State.