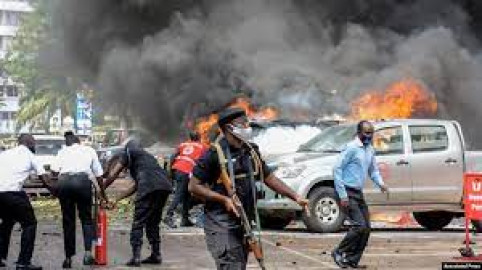 Police say they are looking for a second cleric who is suspected of recruiting youth to carry out terrorist attacks.

Analysts warn Ugandan police must enforce security according to the law to avoid encouraging further recruitment.

Uganda’s security agencies Thursday morning raided the home of a suspected terrorist in Kampala, killing him and arresting his wife.

Ugandan police say Sheikh Muhammed Kirevu, also known as Abbas Kirevu, was involved in recruiting personnel into the ranks of the Allied Democratic Forces rebel group and promoting the re-emergence of ADF cells within Kampala.

Since Tuesday’s suicide bombings, which killed four people, security agencies have carried out raids in different parts of the country.

Police say a total of 21 suspected ADF terrorists and collaborators have been arrested in Kampala and the districts of Luwero and Ntoroko.

“During the violent encounter with them in Ntoroko, there was an exchange of gunfire and our counterterrorism operatives managed to put out of action a group of four suspect terrorists who formed part of the recruitment and logistical coordination network,” he said.

Enanga said the four suspected terrorists were closely linked to the number 5 commander of the ADF, only identified as Lubinsa. He said they were crossing back from the Democratic Republic of Congo through one of the porous crossing points in Kisege, Ntoroko district.

According to Enanga, the counterterrorism unit is now searching for another cleric.

“We are now intensifying the manhunt for Sheikh Suleiman Nsubuga who is one of the main actors behind the recruitment, training and radicalization. He’s been providing material support and resources to the domestic terror cells and also providing resources and materials on the use of explosives and destructive devices,” Enanga said.

The ongoing raids are raising questions on whether Uganda’s security forces are operating within the law or are just being reactionary.

Jason Stearns, director of the Congo Research Group at New York University, says the ADF, which is allegedly affiliated with the Islamic State and has carried out attacks in Rwanda and Mozambique in addition to Uganda, is using violent attacks not to overthrow the Ugandan regime but to attract international recruits from sympathizers and funding from both the region and abroad.

Stearns said the ADF is also useful for some governments in the region, particularly Uganda and the Democratic Republic of Congo because it gives them an excuse to crack down on opposition groups and attract international support, especially from the United States.

But, Stearns warned, the current security reaction will only further the cause of the ADF.

“Nothing would boost the ADF’s recruitment drive more than to have a violent crackdown on Muslims, or even on people affiliated with the Tabliq sect, for example, in Uganda. And so, it’s important when dealing with threats like these to properly calibrate the response and not to exacerbate the problem itself,” Stearns said.

In a statement Tuesday, Ugandan President Yoweri Museveni tried to reassure Ugandans, saying the government was more than ready to deal with urban terrorism. He referred to the killed suspects as manipulated victims of confusion.