‘I have President Kenyatta's blessings,’ Natembeya says on his Trans Nzoia gubernatorial bid 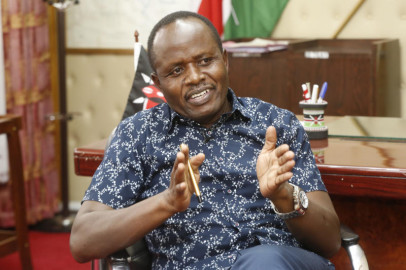 Former Rift Valley Regional Commissioner George Natembeya has asserted that his decision to resign from the National Police Service (NPS) was a calculated move that was not made on a whim.

On Wednesday, Natembeya announced that he would be leaving his NPS position, after a 26-year stint, to pursue a career in politics with the former RC seeking to contest for Trans Nzoia’s gubernatorial seat at the August General Election.

According to Natembeya, his decision to exit the police force was not made prematurely but was inspired by high ranking government officials including President Uhuru Kenyatta who urged him to pursue his aspirations to bring positive change to the people of Trans Nzoia.

“I have the blessings of President Kenyatta, CS Fred Matiang’i and my immediate former boss PS Karanja Kibicho. I cannot walk out of government like an estranged wife,” Natembeya said in a TV interview on Thursday.

On Thursday, Interior PS Kibicho, in a letter, stated that following his resignation Natembeya had been deployed to President Uhuru Kenyatta’s office headquarters at Harambee House, sparking debate among Kenyans.

Natembeya however underscored that his deployment was part of a legal protocol that high-ranking police officers go through when retiring from the force.

“My exit from the government was not instant. I am handing over to my successor and this will take almost a week because there are things we are doing. You don’t just walk in and walk out. There is a process,” he said.

“I will never be a RC again and I have quit purposely to go into elective politics so the idea of being moved to Harambee House is just a process. So there should be no doubt whatsoever that I have quit government.”

While drumming up support for his gubernatorial bid, Natembeya advised Kenyans to exercise caution when electing leaders into office at the August polls. According to Natembeya Kenyans should look at what aspiring leaders bring to the table in terms of development and not the political parties to which they are affiliated.