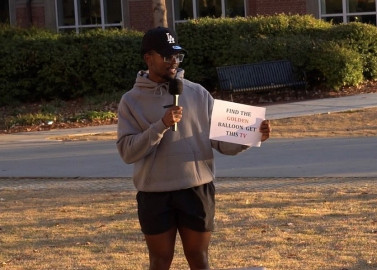 Kenyan TikTok star Leon Ondieki in one of his skits.

In between lectures on a regular day, Leon Ondieki will get his camera and tripod, and roam around campus making fun videos quizzing his schoolmates with his friend-cum-cameraman.

He will edit the footage into a 32-second clip late into the night, after catching up with homework, and share it on TikTok, where it will fetch between 100,000 and well over 60 million views.

Welcome to the exciting life of Leon Ondieki.

Born in Kenya and raised in Georgia from the age of five, the 19-year-old lives in the state’s city of Athens as he pursues his Management Information Systems major at the University of Georgia.

It all began with a short fitness skit he recorded and shared on the platform in 2019 during his high school senior year.

“The video went viral two weeks later, amassing over 11 million views and gaining me over 100k followers,” says Ondieki, attributing his popularity on TikTok to the clip.

Seeing as he has not cultivated his presence anywhere else, Mr. Ondieki points to TikTok's growing popularity and viral potential as what attracted him to the platform.

With over 1.2 million followers, he has taken advantage of the platform with his biggest video having over 61.3 million views.

His video series “Ur hair tangled” which sees a comb-wielding Ondieki giving complete strangers a challenge to run his comb through their hair is one of the most popular among his videos.

“It consists of me approaching my peers and asking them if their hair is tangled or not before checking to see if it is,” he describes it.

It is as outlandish as they get and has become a favourite among his followers and other internet users alike.

Whether or not you pass the test, you keep the comb at the end of the video.

“It is one of the most popular series I have on my account. My two most viral videos are in the hair tangled series. They have a combined 101 million views,” he says.

Unlike most teenage online stars whose parents show restraint about their internet presence, Ondieki says his parents are supportive about his interest and his family helps him in shooting content.

Amid all the fun videos, negativity from internet trolls used to affect him when he began creating videos, but with time, he says “comments left by trolls became meaningless.”

“There is a lot of negativity on the internet, and I feel like getting rid of that would make it a much more enjoyable tool,” says the young sensation.

As the viewership and following keep burgeoning, so have the opportunities. So far, Ondieki says he has begun attending social media influencers’ networking events in Georgia.

Although TikTok creators are coy about discussing what they make from the platform’s Creator Fund due to the fund’s terms and conditions, a Business Insider report places the figure at around four cents per 1,000 views.

“It only amounts to a small portion of our income,” says Ondieki, “the majority of our TikTok earnings come from brand deals and collaborations.”

An account with such numbers as his, he adds, typically collects from Ksh.113,000 per commissioned post, “depending on the video requirements.”

About 370 clips and counting, Ondieki is only getting started and is certainly one to watch out for. And if you are wondering why you need to, one commenter put it well; “the boy gives off 'Luke from Modern Family' vibes.”