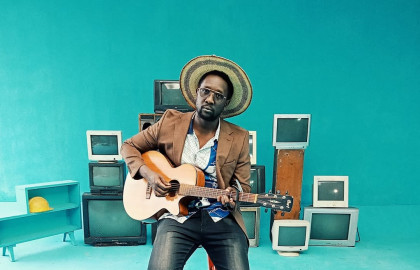 Tetu Shani, a Kenyan folk singer, has spoken out about his dissatisfaction with the All Africa Music Awards (AFRIMAs) he attended last week.

Shani was nominated in the Best Artist, Duo, or Group in African Rock category at the awards, which were held in Lagos, Nigeria from November 18 to 21.

Tetu chastised the award show and its Nigerian hosts in a series of tweets published on Wednesday, citing poor communication between organizers and artists, as well as the exclusion of artists from other African countries and poor hospitality.

Shani claims that after his nomination, AFRIMA sent him an introduction letter to present to the embassy, in which the award show stated that it would cover the artists' flights, lodging, all meals, and local transportation expenses.

According to him, problems began long before he arrived in Nigeria.

The artist adds that he and fellow nominees were held in the hotel lobby for a long time without communication while the award show staff attempted to organize their accommodations, after which they were assigned AFRIMA handlers, who he also claims were "unavailable."

“Most of us were hungry for dinner after our long flights but none of our handlers were telling us anything. We eventually learned through each other that instead of AFRIMA covering all meals, we would be on bed and breakfast and one other meal” he went on.

Furthermore, Shani claims that the Nigerian media's coverage of the event's visiting African artists was very Nigeria-centric and ignorant of the show's Pan-African theme.

“Questions like ‘Who would you like to collaborate with in Nigeria?’ ‘What do you like most about Nigeria?’ And the one that annoyed me most, ‘What is your biggest song in Nigeria?’,” he added.

He further condemned the pre-party for what he termed as being very Nigerian, with the DJ playing mostly Nigerian songs.

According to Shani, the awards ceremony itself was not very friendly, with some nominated artists finding it difficult to find seats and being forced to leave the nominees sitting section.

“I'm highlighting these issues so that there can be improvement next year. Honor your nominees regardless of their country, provide for them, communicate with them, and protect them from disrespect,” he wrote.

Since then, the award show has spoken out about Shani's story, stating that its committee is looking into the issues raised.

“Our International Executive Committee is working to investigate and review all the feedback and take necessary corrective measures so that such do not happen again,” wrote the award show on Twitter.

“We regret the not-too pleasant experience you had with the poor management by Eko Hotels and some hospitality staff. This was never in our contemplations and intentions. We sincerely apologize!”

"Although some of the nominees who did not win are disappointed," the statement continued, "it is our goal to widely celebrate the hard work of all music icons on the Continent, regardless of their nationalities, gender, or language."