Two dead in midair collision between a plane and helicopter 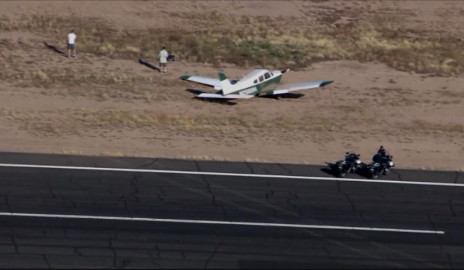 Two people are dead after a midair collision between a helicopter and a fixed-wing plane in Arizona Friday morning, according to Chandler Fire Department spokesman Keith Welch.

Both aircraft are operated by flight schools, Chandler Police spokesperson Sgt. Jason McClimans told CNN. The plane that was involved in the crash landed safely at Chandler Airport.

The helicopter in which two people were killed was operated by Quantum Helicopters, and the plane which landed safely is operated by Flight Operations Academy, McClimans said.

CNN has reached out to both flight schools for a statement but didn't immediately hear back.

Welch told CNN affiliates KTVK/KPHO that his department got the call around 7:45 a.m. local time, and found a helicopter down and on fire in a field. The two passengers were deceased, Welch said.

The NTSB tweeted that they are investigating the crash between a Robinson R22 helicopter and a Piper PA28-181 airplane.

Chandler Police are investigating the crash and are looking for information from any potential witnesses, and asking if anyone happened to videotape the accident.