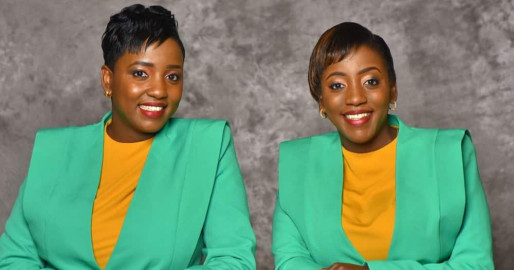 According to KBC, the beautiful duo will be tasked with presenting the Dira ya Magwiji show on Saturdays at 7:00 pm alternating with Pauline Sheghu.

Prior to their appointment, Jamila hosted the Property show on NTV while Wanjiru worked as a communication consultant at Diamond Media.

The twins will replace experienced Kiswahili anchor Bahdi Muhsin, who passed away on October 8, 2021.

Bahdi made a comeback to the Kenyan media world in June 2021, when KBC rebranded, after a 19-year hiatus. He retired in 2002 after having served for almost three decades at the broadcaster.

The 67-year-old met his demise when he travelled to the Coast Region for an interview for the Dira ya Magwiji show.

According to his brother Hafidh Muhsin, despite feeling under the weather, Bahdi was okay when the pair had lunch on the day in question before he proceeded to his room to get some rest. He was, unfortunately, discovered dead soon after.

During his long service in the Kenyan media, Bahdi was gifted the Order of the Grand Warrior (OGW) by retired President Mwai Kibaki in 2011. Great Swahili author Wallah Bin Wallah also recognized Bahdi as one of the best Swahili news anchors in the country.