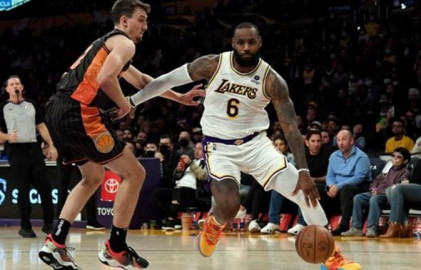 LeBron James starred with a 30-point triple-double as the Los Angeles Lakers beat the Orlando Magic 106-94 this morning.

It was James' 101st career triple-double as the Lakers recorded their fifth win in seven games.

James scored 14 of his points in the third quarter for the Lakers and added 11 rebounds and 10 assists to his tally.

It was the Lakers' second straight win without all-star Anthony Davis who is out with a knee injury.

James recently became the fifth player in NBA history to reach the milestone of 100 triple-doubles after scoring 20 points with 10 rebounds and 11 assists in the Lakers' recent defeat by the Memphis Grizzlies.

Elsewhere on Sunday, Kevin Durrant shone for the Brooklyn Nets, scoring a season-high 51 points in their 116-104 win over the Detroit Pistons.

The 11-time all-star joined the Golden State Warriors' Stephen Curry as the only players to record a 50-point game this season.

Durrant, who is the league's current leading scorer, equalled the fifth-highest scoring performance in Nets history. Deron Williams holds the record with 57 points against the Charlotte Hornets in 2012.

It was also his seventh 50-point game of his career.

Derek White scored 24 points registering eight rebounds and nine assists for the San Antonio Spurs in their victory over the New Orleans Pelicans and the Dallas Mavericks grabbed a win on the road with a comfortable 103-84 victory over the Oklahoma City Thunder.