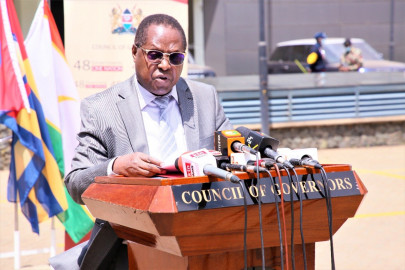 The Council of Governors (CoG) has called on the National Treasury to accelerate the payment of equitable share allocations to counties.

CoG Chair Martin Wambora, speaking during a press address on Wednesday, revealed that the government is yet to disburse Ksh.42.26 billion to counties.

“We urge the National Treasury to accelerate the disbursement of the outstanding balance of Ksh.42.26 billion to enable counties implement their programmes,” stated Wambora, who is also the Embu Governor.

Wambora further decried Parliament’s delay in passing the County Governments Conditional Grants Bill, 2021, noting that it has hampered service delivery in the counties.

“We therefore, urge the speakers of the National Assembly and Senate to fast-track the process of appointing members to the mediation committee that will consider the Bill to ensure it is passed in the shortest time possible,” he stated.

The Bill, which seeks to create a legal framework for disbursement of conditional grants from the national government and donors to county governments, has been delayed following rejection of amendments made by Parliament on December 21, 2021.

It is set for mediation by a joint committee of the National Assembly and Senate.