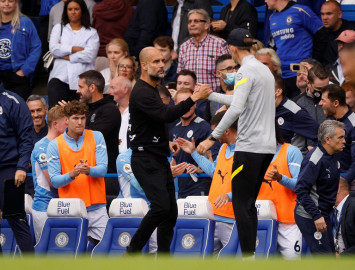 Chelsea travel to Manchester City on Saturday knowing victory is essential if they are to keep pace with the relentless Premier League leaders this season.

City's 11th consecutive league win - a last-gasp 2-1 success at Arsenal on New Year's Day - took the champions 10 points clear of second-placed Chelsea as Pep Guardiola's side look on course to retain the title with another sky-high points total.

The run is the fifth time City have managed 11 or more consecutive victories in the competition, though all is not lost for Chelsea ahead of their trip to the Etihad Stadium as three of the previous four such runs ended in a home match.

Thomas Tuchel's European champions have struggled to match their early season form of late, having picked up one win and four draws from their last five league games.

The German is fully aware of just how difficult it will be to overhaul City's advantage and stop the league leaders making it four Premier League titles in five seasons.

"They are relentless," Tuchel told reporters after his side's 2-2 draw with Liverpool in Chelsea's last league match.

"They know what it takes to produce these high-point seasons over and over again. We are the next in that race but it's a big gap. Maybe we need longer than one season to catch Man City."

Two sides whose fortunes have improved in recent months meet on Sunday when Arsenal in fifth travel to Tottenham Hotspur, who are looking to win three straight home league games against their north London rivals for the first time since August 1961.

Sixth-placed Spurs are now two points behind Arsenal with two games in hand having been unbeaten in their eight league games under new boss Antonio Conte, the best unbeaten start for a Tottenham manager in the club's league history.

However, below-par performances in both legs of their League Cup semi-final defeat by Chelsea in the past two weeks told Conte all he needed to know about how much work there is to do.

"There's an important gap, an important difference, there's a big job to do to retrieve the situation," Conte said of the chasm in quality between Spurs and Chelsea after last week's first leg defeat at Stamford Bridge.

"If we think we are close [to Chelsea] we are not in the right way."

Arsenal are in a similar situation to Spurs given that their recent improvement under Mikel Arteta has stuttered with a home defeat by Manchester City before being knocked out of the FA Cup by second-tier Nottingham Forest in last weekend's third round.

Seventh-placed Manchester United travel to Aston Villa on Saturday as they look to turn their faltering season around. Results have improved under interim coach Ralf Rangnick, but performances remain inconsistent.

United were fortunate to get past Villa in the FA Cup on Monday, with Cristiano Ronaldo issuing a rallying cry to his underperforming team this week.

"We know we aren't playing the best football but we have many games to improve," he told Sky Sports. "I don't want to be here to be in sixth place or seventh place or fifth place. I'm here to try to win."

Following a six-game winning run in November and December, third-placed Liverpool - who trail City by 11 points but have a game in hand - are without a win in their last three league matches ahead of the visit of Brentford on Sunday.