KPA out to seal top seed ahead of playoffs 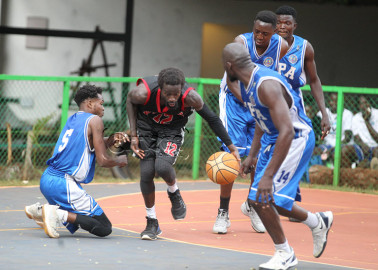 Kenya Basketball Federation (KBF) giants Kenya Ports Authority (KPA) tactician Sammy Kiki is confident his side will secure top seed by flooring defending champions Ulinzi in the last game of the regular season at the Nyayo Gymnasium on Saturday.

KPA’s impervious form has seen them rise to the apex of the men’s league and will be keen to culminate their season on a winning note. Such a feat will not only guarantee them a home-court advantage but a match-up against the eighth-seeded team from the regular season.

Kiki is convinced they will secure the first seed at the end of the season if their current form is anything to go by.

“We have been playing very well recently as capped by our rise to the top and are confident we will defeat Ulinzi to maintain our position going into the postseason.

“Ulinzi is a very good side but we know what it takes to beat them so why not?” he posed.

The dockers have lost only once this season and warmed up for their confrontation against reigning champions Ulinzi by sweeping aside sixth-seed Umoja 70-33 at the Makande gymnasium in Mombasa in what Kiki deems as an outcome of team chemistry that they have developed throughout the season.

Kiki says they are keen to take their recent hot streak into the postseason as they aim to recapture the league title from Ulinzi.

“We desire to have the postseason start immediately we finish our regular-season games so that our momentum remains intact.

“We know there are good teams like Ulinzi, Equity, and Nairobi City Thunder who have claimed the remaining three positions in the top four but I believe we will have a deep run into the playoff given our current form.”

When quizzed on the probability of taking on eighth-seeded Kisumu Lakeside in the quarter-finals stage Kiki intimated that they will not underrate any team urging his charges to maintain their focus if they are to go all the way this season.

“We know that anyone who has made the cut for the playoffs stands a chance of winning it so we will not underrate anyone.

“We will play a game at a time and we are positive we will have a good campaign.”

Their female counterparts Equity Hawks are also in a buoyant mood as they top the ladies’ league going into the postseason.