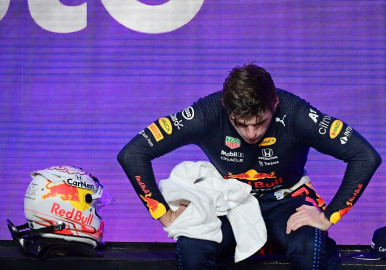 The potentially title-deciding Saudi Arabian Formula One Grand Prix was halted after Mick Schumacher crashed his Haas on Sunday, the red flags playing into the hands of Red Bull's championship leader Max Verstappen.

Mercedes rival Lewis Hamilton had pitted from the lead after the safety car was deployed following the lap-10 crash on Jeddah's super-fast and unforgiving Corniche street circuit.

Red Bull opted to keep Verstappen out on track with the Dutchman taking the lead - a gamble that paid off when the race was halted for marshals to fix the Tecpro barrier for safety reasons.

The stoppage, with cars returning to the pits, enabled Verstappen's Red Bull team to change his tyres without the need for a stop during the race, keeping the Dutch 24-year-old out in front and on fresh rubber for the re-start.

Verstappen leads seven-times world champion Hamilton by eight points with only one race remaining after Sunday's grand prix in Jeddah.

The youngster will be champion if he scores 18 points more than the Briton.

"Why is it a red flag?" Hamilton asked over the team radio. "The tyre wall looks fine... It's unbelievable, man."