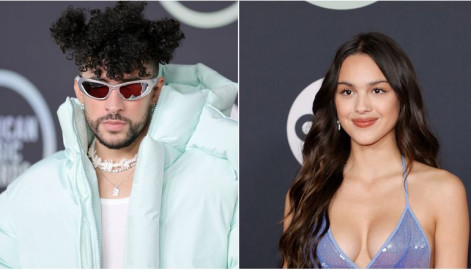 In what may come as no surprise, two names dominated this year in music streaming: Bad Bunny and Olivia Rodrigo.

For the second year in a row, Puerto Rican rapper and singer Bad Bunny was the most streamed artist, according to Spotify's 2021 Wrapped, the annual breakdown of Spotify's streaming data. (Users can also check out more personal breakdowns of what they listened to in 2021.)

With more than 9.1 billion streams this year, Bad Bunny beat out Taylor Swift, who came in at No. 2, followed by BTS, Drake and Justin Bieber, respectively.

But the most streamed song in the world, almost predictably, is Olivia Rodrigo's smash hit "drivers license," which became so ubiquitous that it inspired its own sketch on "Saturday Night Live" and scored Rodrigo an invite to the White House. The song was streamed over 1.1 billion times, with Lil Nas X's "MONTERO (Call Me By Your Name)" coming in second.

That's not the only success Rodrigo saw -- her hit "good 4 u" was the fourth most streamed song of the year, and her album "SOUR" was the most streamed album in the world -- beating Doja Cat's Grammy-nominated "Planet Her," which came in at No. 5. New albums by Dua Lipa, Justin Bieber and Ed Sheeran rounded out the top streamed albums of the year.

Here's more of what the world listened to, according to Spotify's "2021 Wrapped."

"MONTERO (Call Me By Your Name)" by Lil Nas X

"STAY" (with Justin Bieber) by The Kid LAROI

"good 4 u" by Olivia Rodrigo