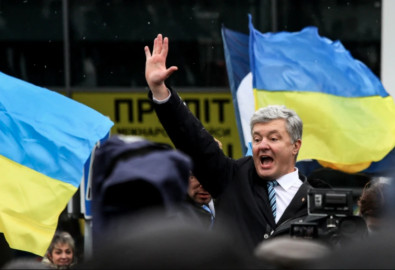 Ukraine's former leader Petro Poroshenko addresses supporters after his arrival at an airport some 40 kilometres outside Kyiv on Jan. 17, 2022.

Former Ukrainian President Petro Poroshenko is due back in a Kyiv court Wednesday as a judge considers whether to grant him bail or order his arrest in a treason case he says is politically motivated.

Poroshenko, who led Ukraine from 2014-19, returned to the country Monday to face the charges, and told supporters at the airport that he had come back to help Ukraine face the “growing threat of Russian invasion.”

He added to that message in a series of tweets Tuesday, saying with the help of its international partners, Ukraine “will stand our ground.”

“My sincere gratitude go for the extraordinary attention paid today to the support of Ukraine, especially of our fight against the ongoing aggression of the Kremlin, by our allies in Washington and London, in Berlin and Paris, in Brussels and Ottawa, in the entire European Union, NATO,” Poroshenko posted.

Prosecutors accuse Poroshenko of treason for allegedly using illegal coal sales to finance Russian-backed separatists from 2014-15. If convicted, he could face 15 years in prison.

He was in court Monday for a hearing that ran nearly 12 hours, with the court deferring until Wednesday the decision whether to grant Poroshenko bail or order his arrest. Prosecutors have requested bail be set at $35 million.

Poroshenko’s return comes as Ukraine faces a tense standoff with neighboring Russia. Tens of thousands of Russian troops have amassed near the border with Ukraine, prompting the United States to express concern that Russian President Vladimir Putin might be planning an invasion.

A U.S. delegation visited Kyiv on Monday to show support for Ukraine amid the standoff.

U.S. Senator Amy Klobuchar, a Democrat, told VOA’s Ukrainian Service, “We have Democrats and Republicans of very different political views here to say we stand with Ukraine, and if Vladimir Putin chooses to take this treacherous anti-democratic path of invading this country, there will be severe and swift sanctions.”

U.S. Senator Kevin Cramer, a Republican, told VOA, “The United States won’t just sit idly by and be a bystander if something happens. What we would like to do is prevent it from happening. We want to be a deterrent. We want to be part of the solution before fighting commences.”

Poroshenko came to power in 2014 after street protests ousted then-President Viktor Yanukovych. He is credited with strengthening Ukraine’s army after Russia annexed Crimea and backed separatist fighters in eastern Ukraine. Poroshenko, however, lost elections in 2019 following a corruption scandal and charges that he had not done enough to implement political reforms.