‘You will not find his signature at the ministry,’ Muturi says Raila did not design Thika Superhighway 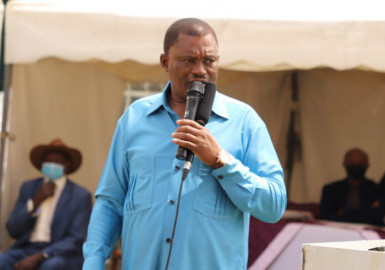 Speaker Muturi faulted Odinga’s style of politics, saying he should cease dwelling on historical occurrences and instead focus on what he will do for Kenyans if elected president.

Muturi, who was addressing leaders drawn from Gatundu South in Ruiru, Kiambu County, on Tuesday, reaffirmed his accusations saying that there was no evidence to support Odinga’s claims.

“There are leaders who only give history saying 'mimi ndo nilichora Thika highway', so what?” He posed.

“I can challenge you, if you go to the ministry you will not find his signature. Stop lying to us and tell the people what you will do.”

He cautioned leaders over engaging in inciteful utterances pointing out that such would awaken the ghosts of the 2007 post-election violence which Kenyans are still ailing from.

“Recent incitement like the 'madoadoa' remarks in Uasin Gishu will take us back to our tribal inclination. 'Madoadoa' word was even at the Hague,” Muturi said.

“We agreed we forgive each other but not forget. Avoid leaders who are using bad language and spreading hate speech while selling their manifesto.”

Muturi consequently called on the Central Kenya residents to mount their support and vote for a leader who would protect their interests and unite them.

“In Mt. Kenya region, we have numbers and that's why all leaders want a slice of our votes. If we're not careful we may end up on our own. I urge residents from the mountain not to allow our leaders to divide us,” he stated.

Similarly, Muturi castigated Deputy President William Ruto over his recent sentiments on tribal political parties stating that his party does not discriminate and welcomes all Kenyans.

“There are rumors going around that the party is tribal. The same party gave us President Mwai Kibaki; the same president who appointed you as minister for Agriculture. So stop saying it's tribal, Democratic Party accommodates everyone,” he said.

Last year, Speaker Muturi declared his candidacy for the country's top seat and has since remained firm in his bid.