Ulinzi Starlets to unveil five ahead of the new season 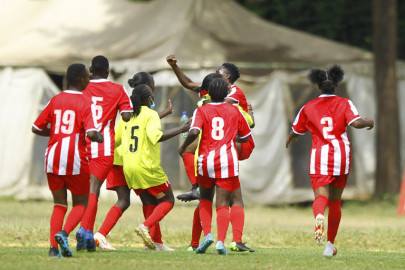 Ulinzi Starlets will unveil their new signings this week ahead of the new season of Kenyan Women Premier League scheduled to kick off on November 13, 2021.

The Joseph Wambua coached side will square it out with the league champions Thika Queens in the Super Cup, the season curtain-raiser set for November 7 at the Utalii Grounds in Nairobi, where he expects to see his new signings in a competitive match.

Wambua said as a way of bolstering their squad, they have signed five new players who have already checked in.

“This week we will unveil our five new players to assist us in the new season. The new faces will bolster the departments in which we have been showing weakness; goalkeeping, defence and midfield.

“I can’t reveal for now who they are but I can just say they are good and experienced players who will certainly help us significantly,” explained a confident Wambua.

Ahead of their Super Cup match clash, Wambua is optimistic of defeating Thika Queens.

“We are the current champions of the FKF Women Cup and we want to cement our authority by beating Thika once again. I believe in my players and everything is working well currently as far as training is concerned. I just want to warn them earlier to expect s tough duel from us.

“Our aim in the next season is to win the title, something I’m sure we will achieve. We have the zeal and capability of achieving it, we just need to keep the focus,” he noted.

The league that has been played in two conferences of Zone A and B having eight teams each will now be unified and will be played in a home and away format, with 12 teams taking part.

Defending champions Thika Queens, Gaspo Women, Ulinzi Starlets, Kayole Starlets, and Zetech Sparks are the five teams that maintained their status in the top tier league and will join the now unified league from Zone A.

Three-time league champions Vihiga Queens will lead four other teams of Nakuru Queens, Wadadia Ladies, Kisumu All Starlets and Trans Nzoia Falcons in forming the unified league from Zone B.

The promoted duo of Kangemi All Starlets and Bunyore Starlets will fill up the remaining two slots to make up a 12-team unified league after Kangemi emerged Zone A champions and Bunyore Zone B winners.

On October 18, FKF Leagues and Competition Committee released the league fixtures where in the first round on October 13, Thika will play Kayole at their backyard while Wadadia will play newbies Bunyore Starlets in Mumias.

In another fixture, Kisumu All Starlets will play Gaspo Women at Moi Stadium, Kisumu.