AMISOM honours Kenyan troops for their contribution to peace in Somalia 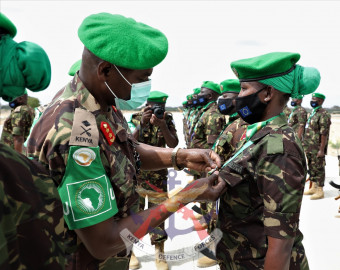 The African Union Mission in Somalia (AMISOM) has awarded medals to Kenyan troops for their distinguished contribution to the ongoing peace and stabilization efforts in the country.

"In a radiant ceremony that was presided by the AMISOM Force Commander, Lieutenant General (Lt Gen) Diomede Ndegeya, the soldiers were applauded for their exemplary roles in promoting the security and economic growth of various sectors in Jubaland State," said a report by the Ministry of Defense.

Lt. Ndegeya went ahead to commend the tenth Kenyan contingent to Somalia for their undying dedication and bravery while executing their duties amidst harsh conditions in the area.

“These medals we are awarding you here today are in recognition of your service to humanity. Wear these medals as honorable and worthy peace ambassadors of your country,” said Lt Gen Ndegeya.

He also noted that, for the past decade that KDF troops have been in Somalia, they have made huge contributions towards its stabilization process.

The lieutenant further lauded the Kenyan deputation for putting up a rapid mobile force that is critical in providing quick reaction while conducting targeted operations to degrade Al-Shabaab.

"The troops remain mission-focused, resilient and motivated in conducting their operations and engagements in line with the AMISOM’s mandate," AMISOM Sector II Commander Brigadier Jeff Nyagah assured the Force Commander.

During the occasion, Lt Gen Ndegeya also opened a Smart Farm at the Dhobley Forward Operating Base.

"The Smart Farm is based on the three main thematic areas; psychotherapy role for supporting troops serving under AMISOM, promoting environmental conservation through tree growing and it is demonstration tool on modern farming methods, targeting women and the youth to empower them economically," the report read.