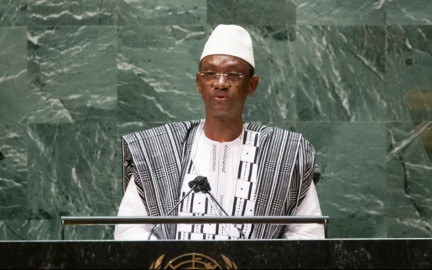 Mali's interim government appears ready to cast aside long-standing counterterrorism partnerships with the United States and France, saying that both countries have failed to make Mali any safer.

But at the same time, Mali's prime minister says reports of a deal to bring in mercenaries from Russia's Wagner Group are just "rumors and allegations."

"The security situation keeps deteriorating by the day," Choguel Maiga told VOA in an interview on the sidelines of the United Nations General Assembly late Sunday.

"Despite the fact that Mali has a lot of partners on the ground, we have to find new partners who can help improve the security situation," Maiga added. "We can seek partnership either with Russia or with any other country."

Reports of a deal between Mali's interim government and Russia's Wagner Group first emerged earlier this month, with Reuters reporting that Mali would pay $10.8 million a month to bring in about 1,000 mercenaries to train Mali's military and provide security for senior officials.

U.S. and French officials have expressed their growing concern that the introduction of Russian mercenaries will do more damage than good.

"We don't think looking to outside forces to provide security is the way forward," a senior administration official said Friday in response to a question from VOA about the potential deal with Moscow. "That is not how to best start down the road to true stability."

French officials have also expressed growing alarm, both in public and private, about the possible deal with the Russian firm.

"We want the return of the Malian state, not the arrival of Russian mercenaries," French Defense Minister Florence Parly tweeted last week. "We are for the sovereignty of Mali, not for its weakening."

Another official with knowledge of the matter called the potential deployment of Wagner mercenaries "a real concern."

"Such a perspective is not a viable and reasonable solution for Mali and the Sahel," the official told VOA on the condition of anonymity because of the sensitive nature of the situation, adding that Malian officials need only to look at developments in the Central African Republic to see the dangers.

"The situation we are currently observing in Central Africa, a country in which more than 2,000 Wagner mercenaries are present, reinforces our view that such a force is pursuing a predatory agenda," the official said. "Wagner is exploiting mining areas and controlling Central Africa customs and, above all, is guilty of serious abuses against the civilian population abuses highlighted by the U.N. in several reports."

Russia has denied any abuses by contractors there.

Mali's prime minister, while denying that a deal with Wagner had been finalized, dismissed the idea that the U.S., France and other countries had any right to criticize the interim government.

"I can only say that the government of Mali is assessing the situation, is seeking better ways," he said. "The day we reach any agreement we will say it, and everybody will know. Whether it is with the Russian state, whether it is with another entity, people will find out."

In contrast to denials from Malian officials, however, Russian officials have welcomed talk of the potential deal with Wagner.

"They are combating terrorism," Russian Foreign Minister Sergey Lavrov said during a news conference at the U.N. on Saturday. "And they have turned to a private military company from Russia in connection with the fact that, as I understand, France wants to significantly draw down its military component."

"We don't have anything to do with that," Lavrov said, adding, "at the government level, we are also contributing to providing for military and defense capacities of Mali."

Many Western governments, though, insist that there is little practical difference between the Kremlin and the exploits of the Wagner Group, run by Russian oligarch Yevgeny Prigozhin.

Prigozhin, sometimes called "Putin's cook" because of his catering company's work for Russian President Vladimir Putin, is thought to have extensive ties to Russia's political and military establishments, according to U.S. intelligence officials.

The U.S. State Department sanctioned Prigozhin and Wagner back in July 2020, as well as several front companies for the group's operations in Sudan.