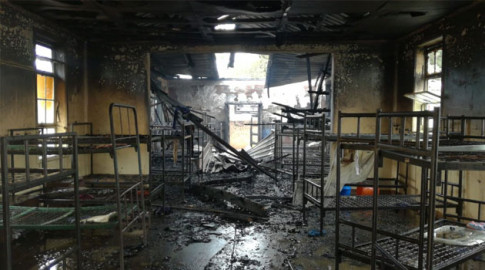 At least 14 students from Dr. Krapf Memorial School in Rabai, Kilifi County have been arrested in connection to a riot that occurred at the learning centre on Monday night.

According to reports, the school’s administration on Sunday evening turned down the student's request to watch an English Premier League match between bitter rivals Manchester United and Liverpool.

The match was slated to begin at 6:30pm and end at around 8:30pm but evening preps at the school run from between 8pm and 10pm. The preps are preceded by supper which starts at 6:30pm and ends at 7:30pm. The decision to bar the students from watching the game was not well received by the learners.

According to police reports, the students are said to have vandalized property on the school and even attempted to set a dormitory that houses 160 students on fire. Their efforts were however not successful with the dormitory just partially catching fire.

The school has since closed its doors to all students for a period of one week. Students in the lower classes will report back on November 2, 2021 while seniors are expected to report a day after.

The school’s administration similarly ordered all students to clear their second term fees in full and to meet other mandatory requirements in order to be granted entry into the institution.