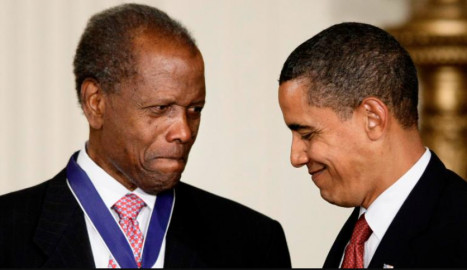 President Barack Obama talks with Sidney Poitier after presenting him with the Presidential Medal of Freedom in 2009.

A death certificate for legendary actor Sidney Poitier, who died on Jan. 6 at age 94, lists heart failure as the cause of his death.

The document, obtained by CNN Tuesday, states Poitier died at his Beverly Hills home in California of cardiopulmonary failure. Alzheimer's dementia and prostate cancer are listed as underlying health issues, the certificate states.

Poitier became the first Black man to win the Academy Award for best actor in 1963, rising to the top of his profession and blazing a trail for Black artists who followed.

Since his death earlier this month, Poitier has been celebrated by fellow performers and for his contributions on screen and remembered by friends and family for his graciousness, advocacy work and goodness off screen.

"We know how graceful and wise he was. How powerful his strength of character and moral fortitude. But what I really want people to know is how GOOD he was," his daughter, Sydney Poitier wrote in a powerful tribute on Instagram last week.

"I know people know he was good, but I don't think they know the depth of his goodness. That it permeated every cell of his being," she wrote. "It's his goodness that changed the world, and it will live on forever."