‘If you have a problem with security forces, blame the president,’ Senator Kajwang tells off Tangatanga 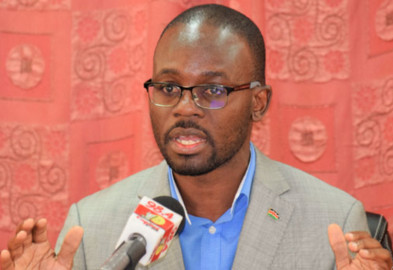 Homa Bay County Senator Moses Kajwang’ has castigated politicians over politicizing arrests in the country and blaming them on ODM leader Raila Odinga.

Senator Kajwang’ called out the Tangatanga team allied to Deputy President William Ruto over their attack against Raila Odinga following the dramatic arrest of businessman Jimi Wanjigi on Tuesday.

The Homabay lawmaker while defending the former premier told off leaders who sought to tie Odinga to the arrests saying that he is not in charge of security forces in the country.

Kajwang’ urged those linking Odinga to security matters to define his position and have the courage to point fingers to the right channel.

“It would be ridiculous; it would be a fantasy to accuse Raila Odinga who does not have any control over the instruments of violence or coercion in this country," Kajwang' said in an interview with NTV on Tuesday night.

The legislator emphasized that Wanjigi had publicly affirmed his relationship with the former Prime Minister and even reassured of his allegiance.

“Jimi Wanjigi confesses that he subscribes to the ideals of the ODM party and in all his public narratives he has consistently said that Raila Odinga is his friend,” Kajwang' stated.

Kericho County Senator Aaron Cheruiyot who was also in the interview had outrightly accused Odinga of involvement in Wanjigi’s apprehension saying that he was a victim of political division.

“Institutions of investigations have been weaponized and are being used to play politics. How do you explain the fact that 48 hours after Jimi spoke up against Odinga, the police showed up at his office?” Cheruiyot posed.

“If it’s about land, why are you sending an anti-terror police unit? Why are you detaining the man overnight? If the charges are ready, they would have summoned him to appear before the DCI and take him to court tomorrow. It has all the traits of political persecution.”

Kajwang rubbished Cheruiyot’s words asserting that politicians in Kenya had mastered the art of dragging Odinga in their issues as a way of chasing clout and popularizing their campaigns.

Citing instances where Cheruiyot had been summoned by NCIC and the recent arrest of Senator Mithika Linturi over inciteful remarks, Kajwang’ implored politicians to own up mistakes and avoid defaming Odinga’s name.

“Sometimes people think that whipping Raila for things he does not know anything about, they are going to get milage. It cannot be that everyone who is arrested, is arrested because they disagree with Raila Odinga,” Kajwang’ noted.

“I want to challenge Aaron, you know who the Commander of Chief is, you know who the convener of the security council of this country is. If you think there is a misapplication of instruments of violence, call out the president directly, don’t call Odinga who is not in those offices.”

Kajwang similarly condemned the Tuesday incident at Wanjigi's Kwacha Offices,  terming it  ‘scary and an abuse of the rule of law.'

He called on the respective authorities to probe the matter and clarify the crackdown by Anti-Terror Police Unit (ATPU).

“What we have seen in social media about the siege and Anti-Terror Police Unit (ATPU) being deployed to arrest a civilian, is a little bit scary,” he said.

“We must get out of this aspect where we are ruled by law rather than rule of law. If there is suspicion of any person with a criminal nature, matters need to be taken in a civilized way especially when we are approaching campaigns.”

“I would want to wait and hear from the DCI about what it is that this ODM presidential aspirant what he has been accused of,” he added.