How Kalwale balances talent and profession 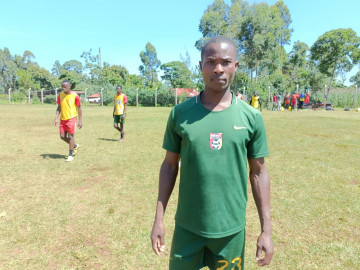 Kalwale who is currently playing for Vihiga Bullets as a defender, is a father of two and a second born to a single parent of four children from Hamuyundi village, Vihiga constituency in Vihiga County.

For a yonk, most people believed sportsmen and women are illiterate, but meet Nickson Kalwale Gamuso - a footballer by talent, a teacher and computer literate by profession.

Kalwale who is currently playing for Vihiga Bullets as a defender, is a father of two and a second born to a single parent of four children from Hamuyundi village, Vihiga constituency in Vihiga County.

Citizen Digital had a one on one with Kalwale on his talent and profession.

Q: What inspired you to start playing football?

A: We are blessed in our family. This is a sport-full family. My siblings do engage in sporting activities. My elder brother plays football but a county based league for Chandumba FC. My late father was also a footballer.

My younger brother plays hockey though still in school while my sister was unable to balance sports and job, so she had to wave to handball.

Q: How has your soccer journey been?

A: When I was young, I used to like playing soccer. From primary school till to date.

While schooling at Mukingi Primary School, I discovered I can glow! I managed to join Califonia FC, currently Wazito FC which nurtured me very well as a footballer.

Later, I joined Chandumba FC, currently in county league then I moved to Sabatia Eye FC while they were playing second Division. I joined Vihiga All Stars when they were participating in nationwide league.

After High School (Mbale Boys), I managed to advance to NSL under Palos FC where my football career doors opened leading me to my current club Bullets till to date.

Q: After advancing to NSL, did any club or team make an effort to sign you?

A: When we were still playing FKF-NSL (Bullets), I got a call up to join Kibera All Stars, but since both of us were still participating at the same level (NSL) and we needed depth on our side (Bullets), I decided not to leave my club.

We strived and managed to advance to FKF-PL during.

That was the only call up I had. I have wished to play for Sofapaka FC, Ulinzi FC or Bandari FC.

Q: Apart from soccer, what else do you do?

A: Am a teacher and I hold computer skills too.

Q: How did you become a teacher?

A: After finishing my high school studies at Mbale High, I heard there was a recruitment at Eregi TTC. That was two years after High School (he emphasized). I used the opportunity to join the institution. I was able to finish my P1 studies in 2016.

Q: Were you sponsored by the institution to study?

A: It was my parent’s efforts. I had no idea my talent could lead to sponsorship. I realized late when I had already joined Eregi. But if I knew it early, I could have joined the institution immediately after finishing High School.

Q: Were you still playing while at tertiary level?

A: Yes! In my first year, I helped the institution to finish runners up in the nationals (Inter-college games), for the first time after 13 years. I was the second best scorer again with seven goals.

In my second year, I was the captain and I managed to help Eregi TTC to lift the inter-colleges sports trophy in Machakos. This time I had five goals. Eregi had not won this trophy for twenty years.

Q: How did your family take it now that you are a footballer and a teacher?

A: It hasn’t been easy. They have been pressuring me to leave football and concentrate in class especially during this hard times - football isn’t paying.

Before, there used to be a rumor that if you're playing top league locally, you are earning handsomely but they are disappointed…Sometimes I have to convince them all will be well soon if sponsors come our way.

Q: And your wife… does she give a hand?

A: She is happy and she understands the ups and downs I am going through because she was once a player at the same institution and she even helped her side (women team) to win a trophy twice.

Q: How is your relationship with the Bullets fraternity?

A: I have a good relationship with the new coach and players at large. We are good, it's just that we haven’t had that winning lack.

Q: Computer literacy, how did you acquire the skills?

A: In High School (Mbale Boys), I was taking computers classes. I dropped it in my second year due to my study load. After High School, I spent two years before joining the University – that’s when I decided to upgrade my studies to certificate level. Currently, the skills put food on my table besides teaching and playing football.

Q: How do you balance the three tasks?

Q: A good number of people say sports men/women are illiterate, is it true?

A: It’s just a virtue. They have papers and skills… It’s just that they don’t manage their time well. They should consider books too and abolish the foregone rumors.

Q: If given a chance to choose between soccer and teaching, what will you choose?

A: I will choose teaching since it’s a long serving profession. Football it’s not a long lasting career. One can retire anytime but teaching is a career with demands.

Kalwale maintains that he will continue defending for Bullets till he gets another greener pastures.