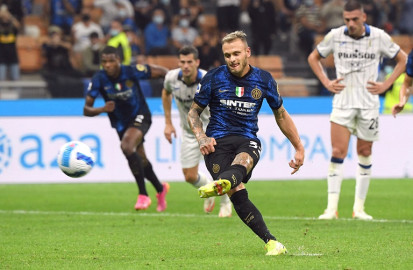 Two of Serie A's great entertainers go head to head on Sunday as free-scoring Atalanta look to derail league leaders Inter Milan, who are threatening to pull clear of the chasing pack.

Despite working to a vastly inferior budget than their rivals, Atalanta continue to punch above their weight in Serie A, with the Bergamo side again sitting in the top four, as they aim to qualify for the Champions League for the fourth season in a row.

Inter's lethal attack has helped them go on a run of eight successive league wins, moving Simone Inzaghi's side back to the top of the standings, one point clear of Milan having played one game fewer.

Inzaghi has plenty of selection dilemmas ahead of Sunday's clash in Bergamo, after fringe forward Alexis Sanchez came off the bench to score the winner in Wednesday's Italian Super Cup success over Juventus.

"Everyone wants to play," Inzaghi told reporters after the match. "Roberto Gagliardini was one of the best against Lazio at the weekend, but he didn't get a minute today, so I have to make choices for Atalanta.

"Lautaro Martinez and Edin Dzeko had worked so hard, (Arturo) Vidal made an impact and (Federico) Dimarco was crucial for the goal. We want to win every match, no matter what it takes."

Juventus will want to get over their Super Cup disappointment quickly when they host Udinese on Saturday, but they will have to manage without Italy forward Federico Chiesa after he damaged his cruciate ligament at AS Roma last weekend.

The performance in the thrilling 4-3 success over Jose Mourinho's Roma last Sunday, when they looked dead and buried at 3-1 down with 20 minutes to go, will give Juve fans hope their side possess the fight to turn their season around.

Serie A's most successful team go into the weekend fifth in the standings, 11 points behind leaders Inter.

After suffering from inconsistency before the winter break, second-placed AC Milan have returned to action in 2022 with two wins from two to keep on Inter's tails ahead of their clash with Spezia on Monday.

Veteran Swede Zlatan Ibrahimovic was among the goals in last weekend's 3-0 win at Venezia.

Napoli, who led the way for much of the campaign following their long unbeaten start to the season, sit third after losing four of their last seven before the winter break. They will look to make it back-to-back Serie A wins when they travel to Bologna on Monday.