Revealed: Why sound was switched off at Etana concert 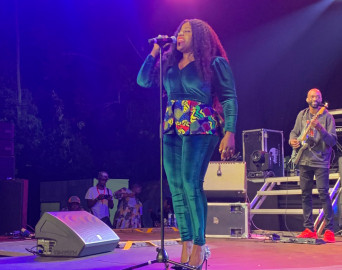 A number of reggae lovers who on October 30, 2021 attended Jamaican star Etana's concert at the Ngong Racecourse Waterfront took to Twitter to complain about there being lack of sound at the event.

One such person is Twitterati Maktejah Brian, who took to the social media platform a few minutes to 11pm saying the sound had been off for about 30 minutes by the time he was posting.

The reports were however swept under the rug, only remaining as whispers among those who actually attended the event.

Citizen Digital can now confirm that the sound at the festival was indeed shut off for a while..

This as the official sound provider of the concert came out to explain why there was that bit of silence some time during the event.

Parrot Group, in a statement released on Friday, said the sound was intentionally switched off by their team.

According to the Parrot Group management, this was because of disagreement in payment with the organizers of the ‘Pamoja Festival.’

The company now urges other Kenyan concert promoters to honour their commitments during future events so as to ensure they go on without such hitches.

“As a service provider, we encourage event promoters to honor their commitments to service providers in order for all involved workforce in an event; casual laborers, sound and screen technicians, security to receive their dues on time as well,” read the statement.

“Having said that, we acknowledge switching off the sound after a night that turned out to be a wild goose chase between our management and the event organizer for the Pamoja Festival event in pursuit of our balance as per the agreement signed.”

The management further added: “We strongly advise Kenyan promoters in our industry to support our own and sell Kenya to the world. We remain committed in providing quality and reliable services to our esteemed customers and partners.”

Citizen Digital  has since reached out to representatives of the festival organizers, The Kulture NBO, to which they responded saying the matter is presently being looked into and a statement to that effect will soon be released.