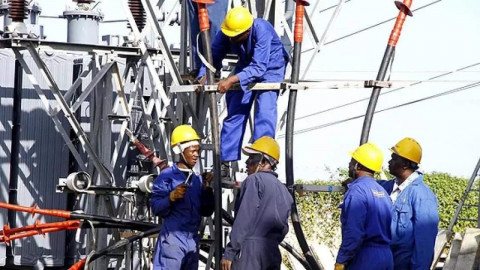 Kenya power technicians at work in a file image

Parts of Embakasi, Kitengela and Athi River are still cut off from power supply.

According to a  Kenya Power statement released on Wednesday, the outage has been occasioned by a technical fault on the Suswa-Embakasi high-voltage transmission line that tripped electricity on Tuesday night.

“Engineers from the Kenya Electricity Transmission Company (KETRACO) are on site to repair the line and pave way for restoration of normal power supply by 5PM this evening,” the statement reads in part.

Other areas that have been affected by the outage include: Industrial Area, Langata, Jamhuri, Kilimani, Nairobi CBD, Hurligham, Syokimau and Westlands.

Throughout the day on Tuesday, irked customers who had been thrown into the unexpected blackout, took to Twitter, tagging everyone that has the “KPLC” acronym on their bio.

American weather journalist with the KPLC TV-7 channel was among those bombarded with fury-laden tweets on Tuesday, forcing him to issue a disclaimer on Twitter.

“ I just gained several Twitter followers from Kenya over the past 24 hours,” wrote Terry on Tuesday, “Just so you know, I am not associated with the KPLC that is Kenya Power and Light Company for future reference.” The Journalist Tweeted.

“However, I hope you do like weather updates for Southwest Louisiana. Welcome aboard!” He said at the end of his message.

The now infamous blackout that transcended Kenya’s boundaries was reportedly caused by a collapsed tower on the Kiambere-Embakasi High Voltage transmission power line.

In its wake, Kenyans were left tallying their losses, with the Standard reporting that a Mombasa-based glass manufacturer estimated Ksh. 4 million in losses after the outage.

The manufacturer said 50,000 tons of melted raw material for making glass was destroyed after the outage.