Steady and unbowed, Shujaa march on

The Kenya rugby sevens team amassed 19 points after finishing second in the just concluded Vancouver Sevens where they lost 31-12 to Fiji in the final to haul their points tally to 64 after six rounds.

Shujaa’s outstanding performance in Vancouver made them reach the finals for the first time this season.

The icy Monday morning showdown which kept  Kenyan rugby fans awake late in the night was more of a repeat of Singapore Sevens in the 2016/2017 season where the Innocent Simiyu coached boys wrote history; winning their first ever Main Cup trophy in the HSBC World Rugby Series after beating the Fijians  30-7.

However, on Monday, it was reversed roles in a night of nerves as the giants went shoulder- to- shoulder in a tense battle at the BC Stadium that kept fans on the edge of their seats.

Earlier, Kenya had lost narrowly to Fiji in a pool ‘C’ match, falling 24-21 and meeting in the final gave room for a no-holds-barred battle.

True to prediction, the game exploded as early as the first minute when Willy Ambaka picked a pass from the destructive Collins Injera and charged like a Rhino, outmuscling the opponents to touch down for Kenya’s first try with Samuel Oliech converting for a 7-0 lead.

Enroute to the final of the Main Cup, Shujaa overran USA – who are coached by Mike Friday, winning 24-19. Earlier, they slayed another giant, England, winning 12-0 in the quarterfinals.

The brave Shujaa remained true to their indefatigable spirit even after finishing second in their pool, behind Fiji.

At the group level, Shujaa crushed France 14-7, while also whitewashing Spain 43-0, before losing 24-21 to the Fijians.

Poignantly, Shujaa have been improving with each outing. At the Las Vegas Sevens, Shujaa earned 10 points, finishing seventh and the Vancouver performance was a stark improvement. 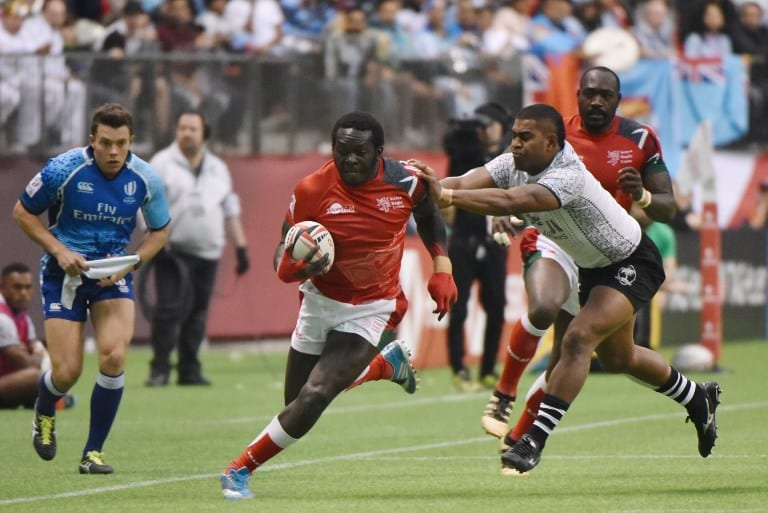 Chief to this is coach Innocent Simiyu changes in team formation and player rotation.

For instance, in Vancouver, all players got a run– helping ease out on fatigue, while the return of speedster Injera and Billy Odhiambo who missed the Sydney and Hamilton Series worked in favour of the team.

Ouma particularly shone in the outing scoring four tries, earning Shujaa 20 points, while Injera, a Mwamba RFC winger managed five points from his single try, increasing his tally to 250 tries in the HSBC World Rugby Series to consolidate his second place in the history of the all-time Series greats.

Kenya, at position eight, is now six points behind seventh-placed England and 23 points ahead of ninth-place Samoa.

Seemingly, Shujaa are on track in attaining their set target – amassing 10 points per round.

Kenya got 10 points in the opener of the HSBC Series in Dubai. It was, however, at the Cape Town Sevens where they failed to rise to the occasion collecting a paltry three points.

The team is expected to jet back tomorrow(Tuesday) at 9 at 9.50pm.