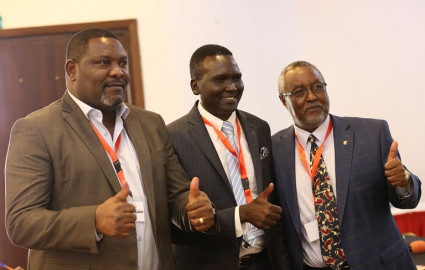 Paul Tergat has commenced a new four-year term as the president of the National Olympic Committee of Kenya (NOCK) after being elected unopposed in Thursday’s polls.

It was a landslide win for most of the executive members, most of whom retained their seats in the polls conducted by the Centre for Corporate Governance at a Nairobi hotel.

Francis Mutuku has been elected as the Secretary General, a seat that he has been serving in acting capacity for the past three years. Mutuku garnered 18 votes to beat his competitors Andrew Mudibo (5) and Francis Kinyili Paul (2).

Eliud Kariuki easily retained his seat as the treasurer after he garnered 20 votes against his rival Moses Mbuthia who had seven votes.

John Ogolla was elected the deputy treasurer with 22 votes after flooring Agnes Alouch who got 5 votes.

In the women's representative seat Paurvi  Rawal was declared the winner after garnering 14 votes to edge Mududa Waweru (11).

“We have worked so hard to make sure that we bring changes that we wanted to bring to improve our sports in our country. We will work as a team to ensure we deliver,” he said.

Tergat said first on his agenda is to deliver another successful outing for Team Kenya in next year’s Commonwealth Games as well as the 2024 Paris Games.

“We have a strategic plan that we have already put in place and which will guide us in our programmes. We have a lot to do and we don’t have any time to waste. We are going back to work immediately,” said Tergat.