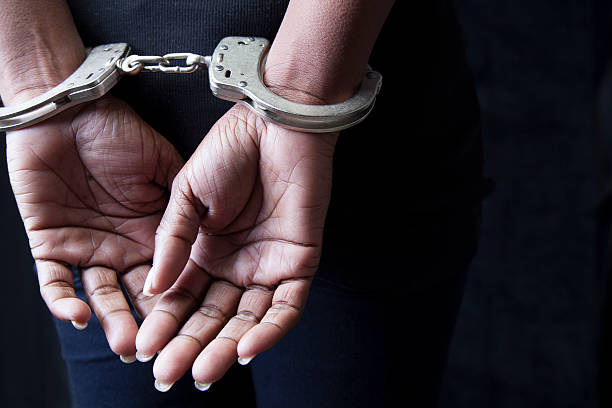 File photo of a woman in handcuffs.

A Kirinyaga woman charged with the murder of an assistant chief in December 2021, has filed an application at the High Court seeking a reduced sentence.

Jedidiah Wanja, who is accused of hacking to death Kiamugumo assistant chief Dennis Magu on the night of December 15, 2021, now wants the murder charge reduced to manslaughter after denying her initial felony before Nanyuki high court judge Hatari Waweru.

Through her Lawyer Kemunto Magara, Wanja argued that she had already served the Office of the Director of Public Prosecutions (ODPP) with a pre-bargain request, which has since been confirmed by lead prosecutor Vincent Mamba.

Ndegwa cited fear of interference with the lined up witnesses by the accused should she be released on bond since the main witnesses into the case were the suspect's children.

Prior to Ndegwa' objection, Magara had told the court that it was the accused's constitutional right to be granted bail as there were no compelling reasons to keep her locked up. Wanja further told the court that by the time the proceedings commenced, no new issues had been adduced into the matter.

She further pledged to comply with all directives issued by the court in the event that she is released on bond.

Both the prosecution and the victim's lawyer soon after requested Wanja’s defense team  to serve them with a formal bail application to which the court approved.

Justice Mwongo authorized that both bail and response applications be filed and served to the necessary parties on or before February 1, 2022.

He similarly ordered that the court be provided with an impact assessment report, by February 8, on the accused so as to consider whether the suspect is fit for release.

"The probation officer needs to conduct a probe on her background, social status and whether if released her security will be guaranteed and if not, what other options can be applied to ensure her safety," said the judge.

Mwongo consequently directed Wanja’s defense team to give more clear terms of the proposed bail request citing that the term reasonable bail is 'vague' and as such needs clarification.