Spain urges Djokovic to set an example and get vaccinated 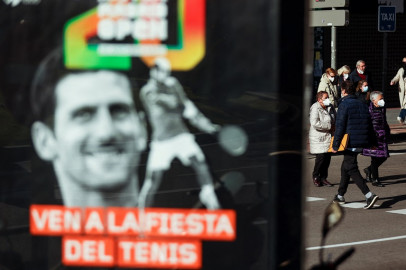 Tennis star Novak Djokovic should set an example and get vaccinated against COVID-19, Spanish government spokesperson Isabel Rodriguez said on Tuesday, when asked if he should be allowed to compete in Spain where vaccination is not mandatory.

The world number one was deported from Australia on Sunday ahead of the Australian Open after entering the country unvaccinated on a medical exemption.

"What Mr. Djokovic has to do is get vaccinated, that would be the most sensible thing to do," Rodriguez told a news conference.

"Leading by example is important and this is indeed what our country's great sportsmen and women do. For example, Mr (Rafael) Nadal," she added, referring to one of Djokovic's great rivals with whom he is tied on 20 major titles.

Even though vaccination is not mandatory in Spain, the vaccination rate is one of the highest in Europe.

Djokovic travels regularly to Spain where he owns a house in the southern resort of Marbella. He spent a few days there in late December and early January and video footage showed him training there.

Spanish rules currently require people to present either a vaccine certificate, a negative PCR test or a certificate of having recovered from COVID-19 to enter the country, so Djokovic should be able to compete in the Mutua Madrid Open between Apr 26 and May 8. He tested positive for COVID-19 in December.

Madrid has no specific coronavirus-related rules for taking part in sporting events.

France has said he would be barred from playing the French Open in May as things stand because of a new vaccine pass law.

Djokovic is now in his native Serbia, where he received a hero's welcome.