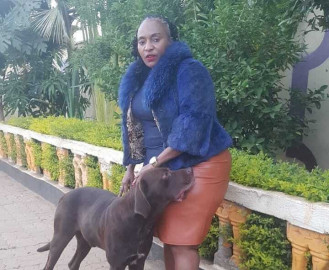 Private detective Jane Mugo has linked her attack by unknown men last week to a murder case she was investigating.

The self-proclaimed ‘spy queen’ says she had a fearful apprehension before the attack because of death threats she claims she had been receiving.

“During the investigations two weeks ago, we realized that a police officer might have been involved in the murder,” Mugo told Daily Nation.

“The kidnappers said a senior police officer had asked them to come for me and my team,” she added.

She said her team has resolved not to pursue the case, whose four suspects are already in police custody further.

Mugo also says her attack could have been motivated by political rivalry following her recent suggestions that she could be running for the Kirinyaga Woman Representative seat in the 2022 polls.

“One of my four abductors demanded to know what is pushing me into Kirinyaga County politics,” she stated.

Mugo’s car was reportedly blocked by armed men driving in two vehicles at the Ainabkoi- Kapsabet junction along the Eldoret-Nakuru highway on Thursday night.

The carjackers beat her on the head and hands using a rungu.

Her driver, Kevin Okoth, and another passenger, Newton Manyana were also reportedly abducted in the incident.

Mugo says the attackers drove off in her car, a black Toyota Land Cruiser of registration plate KCN 222K after leaving her by the roadside.

She was later rescued by passers-by who took her to Kondoo Police Station to file a report, and afterwards to Burnt Forest County Hospital.

She was later transferred to Reale Hospital in Eldoret Town where she is currently admitted.

In a report separately filed with the police later, Okoth and Manyana said they were carjacked by six armed men who fired twice, first in the air and the second at their vehicle.

They were found dumped at Narasha Forest, Baringo County later into the night while Mugo’s car was recovered on Friday in Mumias.