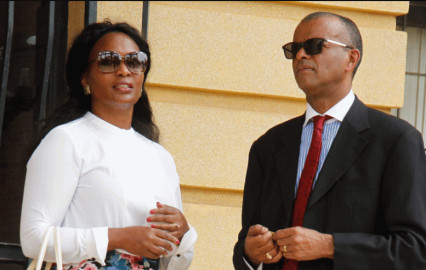 Sarah Wairimu, the widow and suspect in the murder of businessman Tob Cohen, has filed an application in court seeking to be enjoined in a case pitting Court of Appeal Judge Sankale ole Kantai against the Inspector General of Police and the Director of Criminal Investigations.

In her application through lawyer Philip Murgor, Sarah accuses the DCI and the Director of Public Prosecutions (DPP) of depicting her as guilty of her husband’s murder through what she termed as constant media updates.

In a 28-paged affidavit, Sarah accused DCI George Kinoti and DPP Noordin Haji of prosecuting her case through the media.

The document read in part, “Amongst the grievances raised by me through my advocate is the sustained, deliberate and false media propaganda campaign by the Director of Criminal Investigations and the Director of Public Prosecutions, against me through various media outlets under the guise of giving updates to members of the public on ongoing investigations, which extrajudicial media campaign is designed to depict me as being guilty of murder of the deceased.”

Sarah further claimed that investigations into the case have been skewed to disinherit her and her daughter from her matrimonial home on Farasi lane in Lower Kabete.

The application filed before Justice Antony Murima will be highlighted among others on November 15, the Law Society of Kenya (LSK) through President Nelson Havi also sought to be enjoined in the matter that so far has 4 interested parties.

In yet another application, Tob Cohen’s sister Gabrielle Van Straten filed a petition asking the JSC to begin the process of removing the embattled Justice Sankale ole Kantai from office citing gross misconduct.

Through lawyers Danstan Omari and Cliff Ombetta, Van Straten said: "The response filed by the investigation officer laid bare the extent of the involvement, illegal and fraudulent dealings of the judge and his possible culpability in the murder of my late brother."

Van Straten also took issue with the allegations that Sankale aided Sarah in her statements to the police.

“In the Constitution of Kenya, a judicial officer cannot, shall not, will not participate in drafting pleadings for an accused person or for a litigant,” said Omari.

“The only way that such evidence can be set aside and clear your name, is by you participating in the process, not by preventing it, but by throwing your hat into the ring,” added Ombeta.

This is the second petition the family is filing, just last week Van Straten instructed her team of lawyers to petition the Public Service Commission seeking to remove DPP Haji from office on grounds of obstruction of justice for failing to make the decision to charge Kantai.