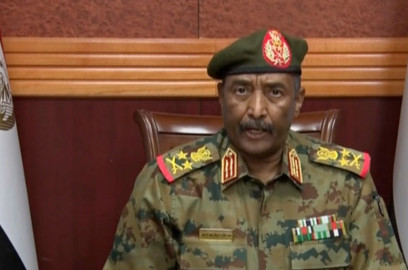 The head of Sudan's military, Gen. Abdel-Fattah Burhan, announces in a televised address, that he is dissolving the country's ruling Sovereign Council, as well as the government led by Prime Minister Abdalla Hamdok, in Khartoum, Sudan, Oct. 25, 2021.

The leader of Sudan's military junta has fired at least six ambassadors from their posts after they spoke out against this week’s overthrow of the joint civilian-military transitional government.

A group of Sudanese diplomats issued a joint statement this week condemning the arrest of Prime Minister Abdalla Hamdok and his wife on Monday, and General Burhan’s decision to dissolve the Sovereign Council and declare a national emergency. The joint civilian-military council had run the country since August 2019, shortly after the ouster of longtime autocratic President Omar al-Bashir in a popular uprising.

In an interview Wednesday with VOA’s English to Africa service, Sudan’s now former ambassador to the U.S, Nureldin Satti, said he would try to undermine the junta.

“I shall be working with my colleagues in the diplomatic service and with the diaspora around the United States and around the world to see to it that this coup is not accepted, and that the coup intentions and results be reversed as soon as possible,” Satti said.

Burhan has pledged the military will turn power over to a civilian government in July 2023 after general elections are held. He said the army’s overthrow of the transitional government was necessary to avoid a civil war.

The U.N. secretary-general’s special envoy to Sudan, Volker Perthes, met with Burhan Wednesday to discuss the takeover and subsequent developments, according to U.N. spokesman Stephan Dujarric. Perthes reiterated that the U.N. wants to “see a return to the transition process” and demanded an immediate release of all arbitrarily detained.

Sudanese security forces arrested demonstrators in Khartoum Wednesday, including three leading pro-democracy activists. Deposed Prime Minister Hamdok was released Tuesday, a day after his arrest, but remains under tight security at his home in Khartoum.

The international community has ramped up pressure on Sudan since the military takeover. Wednesday, the African Union said Sudan was suspended from all AU activities until power is returned to a civilian government.

The World Bank said in a statement that it has “paused” financial aid to the country and “stopped processing any new operations as we closely monitor and assess the situation.”

The U.S. State Department said it was suspending $700 million in financial assistance to Sudan.

In Sudan, opponents of the coup have called for a “march of millions” on Saturday.

Many businesses in Sudan remain closed in response to calls for strikes, which some doctors and state oil workers said they would join in support of the ousted government. Central bank employees have also gone on strike.

The U.N. Security Council met privately Tuesday to discuss the situation but have so far not issued any statement condemning the coup. Some members, including Russia and China, have publicly questioned whether this week’s events qualified as a coup, and have said council members should not interfere in Sudan’s domestic affairs.

But Kenya’s U.N. ambassador told reporters Wednesday he hoped the council would pronounce itself now that the African Union had taken action.

Hamdok, an economist and diplomat who has worked for the U.N., was named transitional prime minister in August 2019. The transition received strong support from Western countries, including the United States, which removed Sudan from its state sponsors of terrorism list.

But Hamdok faced stiff resistance from elements of Sudan's military. On September 21, forces still loyal to Bashir used tanks to block a key bridge and attempted to seize power. The coup attempt was put down, and dozens of soldiers were arrested.