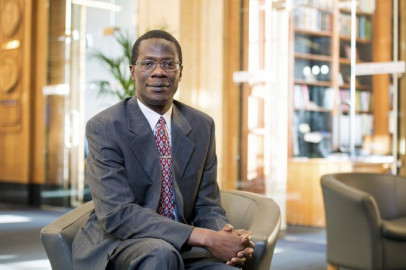 Professor Mokaya who also doubles up as Pro-Vice-Chancellor for Global Engagement in the University of Nottingham in the UK was honoured by the Queen.

The coveted award aims at recognizing British excellence to individuals who impact greatly in their line of work.

In a statement on Sunday, Kenya's High Commissioner to the UK Manoah Esipisu congratulated Prof Mokaya for his exceptional excellence in the services of chemical sciences.

“Congratulations to Professor Robert Mokaya who has been awarded an OBE in the UK New Year Honours for services to the chemical sciences,” Esipisu wrote on social media.

The University of Nottingham identified Mokaya as a role model and mentor to Black academics and students in the UK, being the only Black Professor of Chemistry in the country.

Being a founding member of the RSC Pan Africa Chemistry Network, Mokaya has helped to vastly improve African chemists’ access to chemical knowledge in countries across the continent.

“Robert has continued his research along this path through EPSRC-funded schemes to provide bio-rural energy in Ghana and GCRF-funded safe and affordable low energy cooking solutions for South Africa and Namibia,” added the University press.

“This is an unexpected honour. I am however very pleased that the work that I and many colleagues, including my students past and present, have done over the years has been recognized in this manner. I recognise that this honour would not have been possible without the support of my wife, Edna, and my family to whom I am particularly thankful," said Prof. Mokaya while receiving the award.

The University of Nottingham further acknowledged his efforts in heading a world-leading research group on sustainable energy materials and valorisation of carbon feedstocks and publishing 175 articles with more than 13,000 citations.

Vice-Chancellor of the University of Nottingham, Professor Shearer West in her address lauded Mokaya as an inspiration to Black students in all of the UK and in the African continent.

“Robert is an inspiration to all who work, research or study with him. He also reaches out to identify and encourage young Black students from the UK and African nations to consider courses, research and careers in science, technology, engineering and math.

“A pioneer in his field and a pioneer in supporting greater equality, diversity and inclusion in higher education, I can think of few colleagues more richly deserving of Honours recognition than Professor Robert Mokaya.”