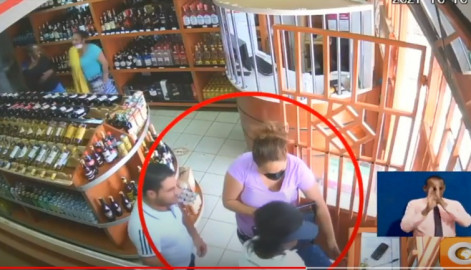 Police have launched a manhunt for three suspects of Indian descent caught on CCTV swindling a mobile money transfer agent in what is suspected to be an act of 'hypnosis'.

The trio, two women and a man, made away with Ksh.51,000 in a bizarre incident that has now become common place along Kiambu road.

Picture this, you’re going about your business on a normal Monday afternoon, potential clients walk in, and within five minutes you have lost what you’d have made in 10 months.

It is at a liquor shop along Kiambu road where Cindy Wanjiru, a mobile money transfer agent, and Joyce Nyambura, a liquor cashier, are captured in what bore all the hallmarks of their routine day at work.

At 3:20 pm, two clients walk in, a lady in purple and a man in a white t-shirt; the lady walks straight to Wanjiru in the pretext of making a liquor inquiry.

As the conversation went on, the man gets a note we are later told was an old Ksh.50 from his pocket and hands it to the lady in the liquor counter; Joyce Wanjiru.

It is the note the women suspect caused all the trouble. The man goes ahead to say he needed to effect a large amount withdrawal from the mobile money transfer agent.

After being handed the now familiar old Ksh.50 note, at this point a second woman makes her way in and immediately draws the attention of Joyce Nyambura. She takes her far from the money transfer agent who now has the two other suspects beside her.

Confusion sets in; Wanjiru opens her cashbox and hands the woman in purple some notes, she counts and hands them back.

After a short conversation riddled with gestures to ensure her full attention was on them, she takes another bundle of notes, counts them as she shows her male counterpart.

The money agent, still in a trance, hands over all the day's takings, which exchanges hands before the man separates and pockets some of it.

All this while, the woman who entered last, is still distracting Joyce Wanjiru on the other side of the liquor store. She says the conversation between them made little sense.

It was not until the three made their way out at 3;26pm and disappeared that the mobile agent snapped out of the trance and noticed they had been swindled.

The bizarre incident was reported at the Runda Police Station where investigations are going on.

It still remains a mystery to Nyambura and Wanjiru how they handed the suspects the money without a single question, they believe the old fifty shilling note that the suspects initially handed them may have put them in a trance.

The suspects are yet to be identified or arrested.