3 pupils die after drowning at River Kiama in Muranga 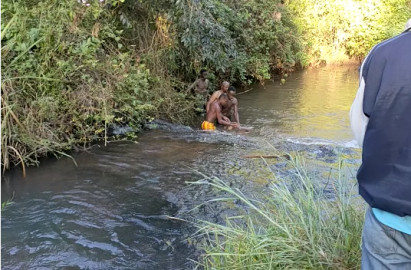 Local divers in Kagiri, Murang'a County, retrieve the body of one of the boys who drowned at River Kiama on Sunday, January 9, 2021.

Three pupils from Kagiri in Gatanga, Murang’a County, have been confirmed dead after drowning at River Kiama on Sunday.

The three boys, who were in Standard Seven at Mabae Primary School, were on their way from a nearby barber shop in Kirwara market when they decided to dive into the river, according to neighbours.

“The three passed by my house (on their way to the barber shop) and were served food by my wife. It seems that after being shaved, they thought it was quite early and decided to pass by the river and swim,” one of the neighbours told Citizen Digital on Monday.

“We were in Kirwara market when we heard that there were three bodies floating on Kiama river then we rushed there but the boys were already dead when we arrived,” he added.

Local divers were able to retrieve two of the boys’ bodies on Sunday night while the remaining was retrieved on Monday morning.