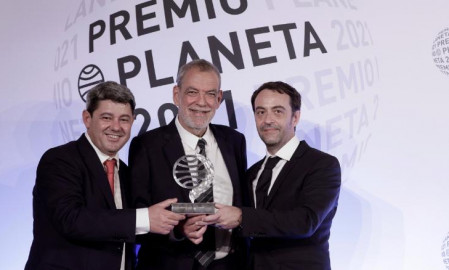 Spain's literary world has been thrown into chaos after a coveted book prize was awarded to "Carmen Mola" -- an acclaimed female thriller writer who turned out to be the pseudonym of three men.

Television scriptwriters Agustín Martínez, Jorge Díaz and Antonio Mercero shocked guests, who included Spain's King Felipe and Queen Letizia, at the Planeta awards Friday when they took to the stage to pick up the prize money and reveal the celebrated crime author did not actually exist.

On the website for Mola's agent, the writer -- who has been compared to Italy's esteemed novelist Elena Ferrante -- is described as a "Madrid-born author" writing under a pseudonym in a bid to remain anonymous. The description for Mola on the website also contains a series of photographs of an unknown woman looking away from the camera.

In previous interviews with Spanish media, Martínez, Díaz and Mercero had presented Mola as a female university professor who lived in Madrid with her husband and children.

Mola's novels usually revolve around the character of detective Elena Blanco, described by publisher Penguin Random House as a "peculiar and lonely woman" and a lover of "grappa, karaoke, collectors' cars and sex in SUVs."

However, the book that won the Planeta prize was not a story featuring Blanco. It is a historical thriller called "The Beast" set during a cholera epidemic in 1834 and centers around a serial killer who is hunted down by a journalist, a policeman and a young woman.

The Mola novels are well known for being gory and graphic -- and Spanish media has noted in the past that the contrast between Mola's supposed life as a married university professor and the violent nature of the books served as a useful marketing tool.

In an interview with the real authors following the revelation, Spain's El Mundo newspaper reported: "It is not lost on anyone that the idea of a university professor and mother of three, who teaches algebra classes in the morning and, in the afternoon, writes novels of savage and macabre violence has been a good marketing operation."

The news stunned many fellow literary figures -- and not everyone is thrilled about the news. Beatriz Gimeno, who describes herself as a writer and a feminist -- and who was once the director of the Women's Institute, a key national equality body in Spain -- took to Twitter to criticize Martínez, Díaz and Mercero.

In a tweet, Gimeno said: "Beyond using a female pseudonym, these guys have spent years doing interviews. It's not just the name, it's the fake profile they've used to take in readers and journalists. Scammers."

In 2020, a regional branch of the Women's Institute included Mola's work as part of a selection of "feminist reading" alongside Canadian poet Margaret Atwood and Spanish writer Irene Vallejo.