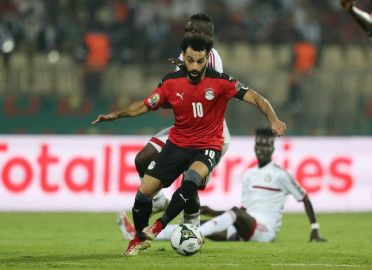 Africa’s four top players failed to make a mark at the Africa Cup of Nations finals but the start of the knockout rounds on Sunday (Jan 23) offers a chance at least for Sadio Mane and Mohamed Salah to deliver on their home continent.

The Liverpool duo are part of a quartet who have finished in the top three for the past four African Footballer of the Year awards, establishing themselves as the continent’s best and who were the main attractions at the finals in Cameroon.

The other players are Arsenal striker Pierre-Emerick Aubameyang, sent back to London for health reasons, and Manchester City winger Riyad Mahrez, the captain of holders Algeria who crashed out in a dramatic fall from grace.

Senegal’s Mane and Egypt skipper Salah scored in the group stage as their countries advanced, but their own form has been underwhelming, disappointing fans who have come to watch them.

Mane netted with a penalty in stoppage time at the end of their opening Group B game for a disputed win over Zimbabwe and has played two more full matches but without any impact.

Admittedly, Senegal have been best by COVID-19 problems and only had goalkeeper Edouard Mendy, who won a FIFA award on Monday, and captain Kalidou Koulibaly back for their last group game against Malawi.

But against the Cape Verde Islands in the last 16 on Tuesday, Mane has the opportunity to deliver on expectations in a potentially one-sided encounter.

Salah will need to step up his performance if Egypt are to have any chance on Wednesday against the Ivory Coast in Douala.

The marquee match of the second round is a tough encounter for Egypt, who have looked lacklustre with Salah providing little impact.

The Egyptian made it clear last week that he was desperate for Cup of Nations success. “I didn’t win any major tournament in my 10-year career with Egypt and I hope to do that this time,” he said.

Aubameyang’s Gabon are also playing in the last 16 on Sunday against Burkina Faso but without him. He tested COVID-19 positive on arrival in Cameroon and then showed signs of cardiac lesions before being released back to Arsenal for more tests.

Mahrez went home with Algeria after they finished bottom in Group E, having suffered an embarrassing loss to tiny Equatorial Guinea.

“We were not at the right level. I assume and take all the responsibility. It's part of football. We win, we lose. We gave everything. We can't do anything more. Hopefully, we will come back stronger,” he said.