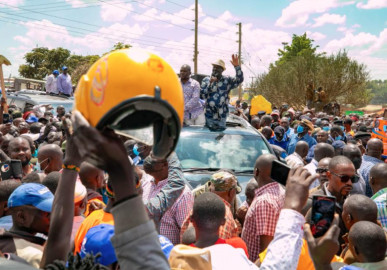 The Orange Democratic Movement (ODM) party leader Raila Odinga has lashed out at his rivals in the Deputy President William Ruto-led Tanga Tanga camp accusing them of deceiving Kenyans with empty promises.

Speaking during his tour of Trans Nzoia County on Saturday, the former premier questioned the source of the money Tanga Tanga has been dishing out, alluding to alleged mishandling of public funds on their part.

Odinga defended his social protection fund agenda that has attracted a lot of criticism from his competitors saying he will raise money for the proposal by shutting down all loopholes of corruption.

He told area residents how when former President Mwai Kibaki and himself promised free education for all, critics ridiculed them but they made it possible.

The ODM leader stressed on the need to improve the livelihoods of Kenyans saying under his leadership, the country’s economy will thrive.

He emphasized on the current state of health in the nation where he highlighted the plight of the poor in hospitals unable to afford medical care, as well as instances where the government holds bodies in morgues when families are unable to raise mortuary fees.

Raila on Saturday toured various areas of Trans Nzoia County among them Sibanga, Maili Saba, Kolongolo, Endebbes, and Matisi; he is expected to continue on Sunday.