Raila on claims of sabotaging DP Ruto’s Jacaranda rally: Nairobi is my stronghold, they have sensed defeat 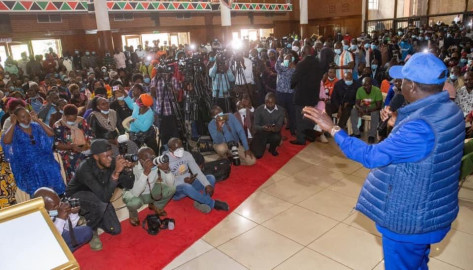 Orange Democratic Movement (ODM) party leader Raila Odinga has dismissed claims that his supporters have been orchestrating violence against his political rivals in their rallies.

Speaking at City Hall, Nairobi, during the launching of the Voter Registration exercise on Tuesday, Odinga downplayed his rivals saying that he has an edge over them politically and therefore he does not need to mobilize chaos.

In what seemed to be a thin-veiled attack against Deputy President William Ruto, the former premier said the allegations were as a result of his competitors’ fear of failure.

Odinga, while expressing confidence at clinching the presidential seat in the August polls, said he will comfortably floor his rivals hence does not need to organize unrest.

He cited the 2017 elections in which he triumphed in Nairobi, hence adding that the nation’s capital has long been his stronghold.

He explained that since now he enjoys President Uhuru Kenyatta's support, his chances of victory have been boosted and he will rise without much pressure from his opponents.

He at the same time implored the youth and unregistered voters to turn up for the ongoing registration exercise saying:

This comes after DP Ruto’s convoy was on Sunday disrupted by rowdy youths at the Jacaranda Grounds in Embakasi East where the United Democratic Alliance (UDA) party held a rally.

The DP and his allies have since accused Odinga’s camp of being behind the rally’s sabotage.